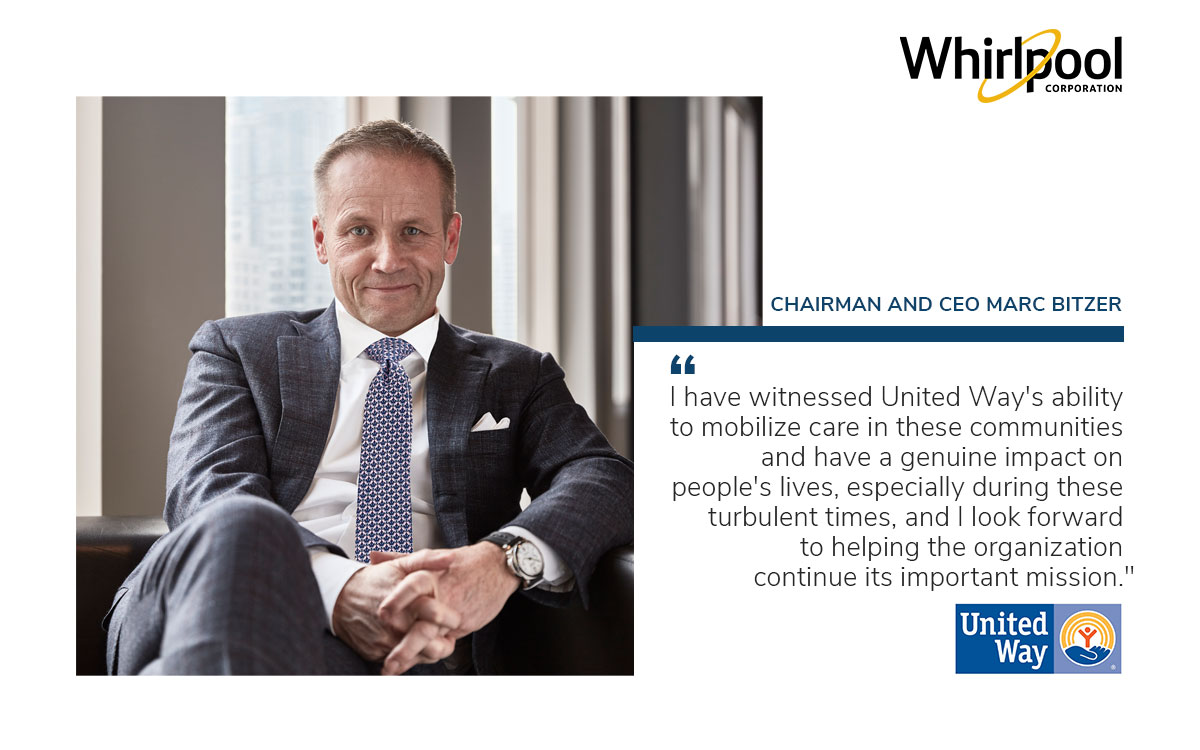 United Way Worldwide (UWW) has announced the appointment of Whirlpool Corp. Chairman and CEO Marc Bitzer as the Worldwide Board of Trustees Chair. Bitzer has been a key asset to the Worldwide Board since his election in June 2018, serving on the Executive Compensation Committee and Succession Strategy Subcommittee.

As Board Chair, he will provide leadership as United Way Worldwide works to elevate equitable solutions around the globe that ensure equal access to financial stability, educational opportunities, and good health through community-driven solutions.

I have witnessed United Way’s ability to mobilize care in these communities and have a genuine impact on people’s lives, especially during these turbulent times, and I look forward to helping the organization continue its important mission.”

“It is an honor to take on a further leadership role at United Way Worldwide,” said Bitzer. “Whirlpool Corporation is a global company made up of small towns and communities where our employees and customers live and work. I have witnessed United Way’s ability to mobilize care in these communities and have a genuine impact on people’s lives, especially during these turbulent times, and I look forward to helping the organization continue its important mission.”

Bitzer has more than 25 years of experience leading organizations, being named Chief Executive Officer of Whirlpool Corporation in 2017 and elected as Whirlpool Corp. Chairman of the Board in 2019. Bitzer joined Whirlpool Europe in 1999, serving as Vice President from 2009-2013. He served as President of Whirlpool North America, President of U.S. operations, and later was named Vice Chairman, including leadership of North America, Europe, Middle East, and Africa (EMEA). Before joining Whirlpool Europe, Bitzer worked for eight years as Vice President at the Boston Consulting Group in Munich and Toronto. He earned his MBA and Doctorate from the St. Gallen Graduate School of Business, Economics and Law in Switzerland.

“I am very excited about Marc stepping into the role of Chair of the United Way Worldwide Board of Trustees—and grateful to him for his ongoing valuable service to United Way,” said Anna Murphy, President and CEO of United Way of Southwest Michigan. “His insight and commitment to the work of United Way make him a tremendous asset to Worldwide, and he will undoubtedly make crucial contributions as Worldwide navigates change and reinvents itself.”

United Way brings people together to build strong communities where everyone thrives. As the world’s largest privately funded charity serving 95% of U.S. communities and 37 countries and territories, our humanitarian aid supports 48 million people every year. Through United Way, communities tackle tough challenges and work with private, public, and nonprofit partners to boost education, economic solutions, and health resources. United Way is the mission of choice for 2.5 million volunteers, 7.7 million donors, and 45,000 corporate partners in more than 1,100 communities worldwide in our second century of service. Together, we are building resilient, equitable communities across the globe. Learn more at UnitedWay.org. Follow United Way: @United Way and #LiveUnited.