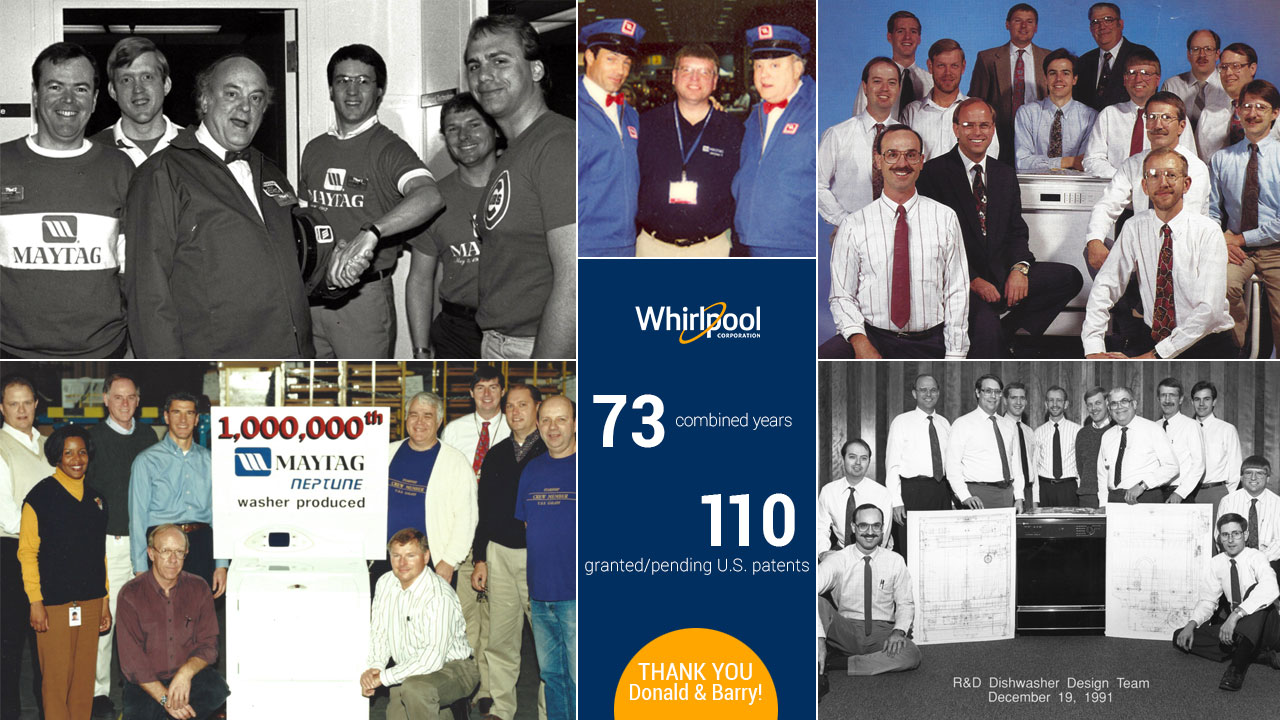 Donald Erickson and Barry Tuller hold more than 73 years of combined service with Whirlpool and Maytag Corporations and over 110 granted or pending U.S. patents, plus many global patents.

For decades, Donald Erickson and Barry Tuller have been using their expertise and passion in mechanical engineering to make Whirlpool Corporation and its brands world-leaders in home appliance innovation.

Both men launched their careers with the company beginning with Maytag Corporation — Erickson joined in 1979; Tuller in 1987. As mechanical engineers, they would each help manage the advancement of some of Maytag Corporation’s most influential home appliances.

In the Maytag dishwasher group, Tuller contributed to the company’s transition from porcelain tubs to plastic tubs. “Plastic tubs had a lot more benefits. They were more versatile and easier to manufacture,” Tuller says. “In addition to the tub, I worked on many other parts, including designing doors and wash and dry systems.”

Erickson made his own name driving the launch of Maytag Corporation’s revolutionary line of front-load clothes washers. “I knew every feature of that machine,” Erickson says. “From the wash algorithms to the controls to the suspension, I was involved in all aspects.”

Erickson and Tuller would continue to lead engineering and intellectual property (IP) development at Whirlpool Corporation after the company acquired Maytag in 2006.

“Engineering is coming up with a new and novel idea to solve a problem. That’s the great challenge,” says Tuller, now a senior manager and IP leader with Whirlpool Corporation’s Advanced Development & Innovation (ADI) team. “However, it’s also important to protect those ideas.”

Specifically, Tuller is referring to patents — assets Whirlpool Corporation continually applies for and obtains globally each year, primarily in part to protect Whirlpool Corporation designs, technologies, products, and services. “Those patented inventions are valuable because they protect our innovation investment and make your competitors work harder, forcing them to go around what is often a more effective solution,” says Tuller, who is an inventor on over 70 U.S. patents.

Erickson, an inventor of over 30 granted US patents, plus many other granted or pending global patent filings, also stresses a patent’s importance. “If you do not get a patent to protect an idea, it is easily copyable,” says Erickson, who has led the Global Laundry IP coordination effort for over five years at Whirlpool Corporation and is currently a principal technologist for fabric care in ADI. “You risk losing the advantage of that product leadership.”

Erickson’s career spans more than 41 years at Whirlpool and Maytag Corporations; Tuller’s stretches more than 32 years at the companies. While both men are scheduled to retire at the end of June, they’ll leave behind much of what they’ve taught incoming generations of engineers.

“Have patience,” Tuller says. “Learn from others with product experience of what’s happened before, what the consumer needs, and how you can improve upon the product and processes.”

Erickson returns to the fundamentals. “I try and reinforce the importance of patents, but also what defines an invention in the first place — what’s unique and novel,” he says. “It’s been very challenging, but these are very smart people, and it’s something I’ve always enjoyed doing.”

“Consumer focused innovation continues to deliver Whirlpool’s product leadership,” says Kirk Goodwin, Associate General Counsel, Global Patents, who also joined Whirlpool Corporation from Maytag. “I saw first hand the positive impact Barry and Don delivered at both Maytag and Whirlpool by focusing their, and their teams’, innovation on the needs of our consumer. Their legacy will continue to serve as an example to us for years to come.”