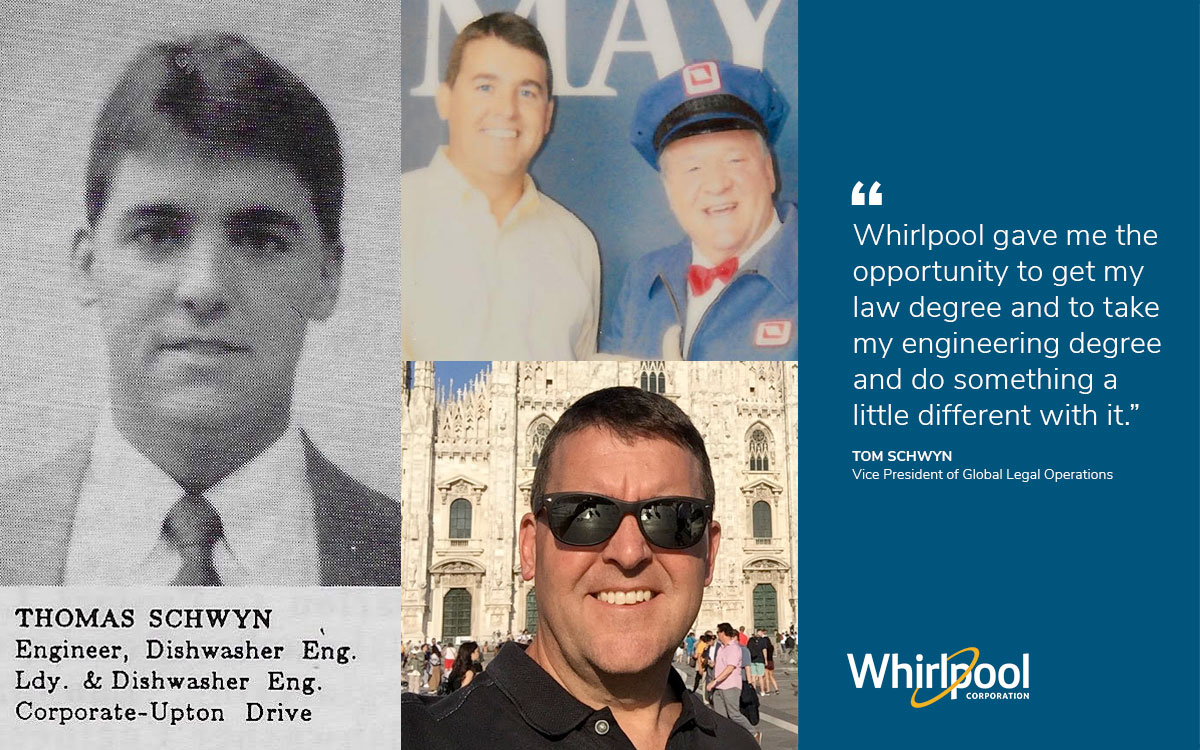 The typical employee stays at a job for just over four years, according to a 2018 study from the Bureau of Labor Statistics. Vice President of Global Legal Operations Tom Schwyn has achieved something almost unheard of in today’s employment market, spending all 36 years of his career at Whirlpool Corporation. 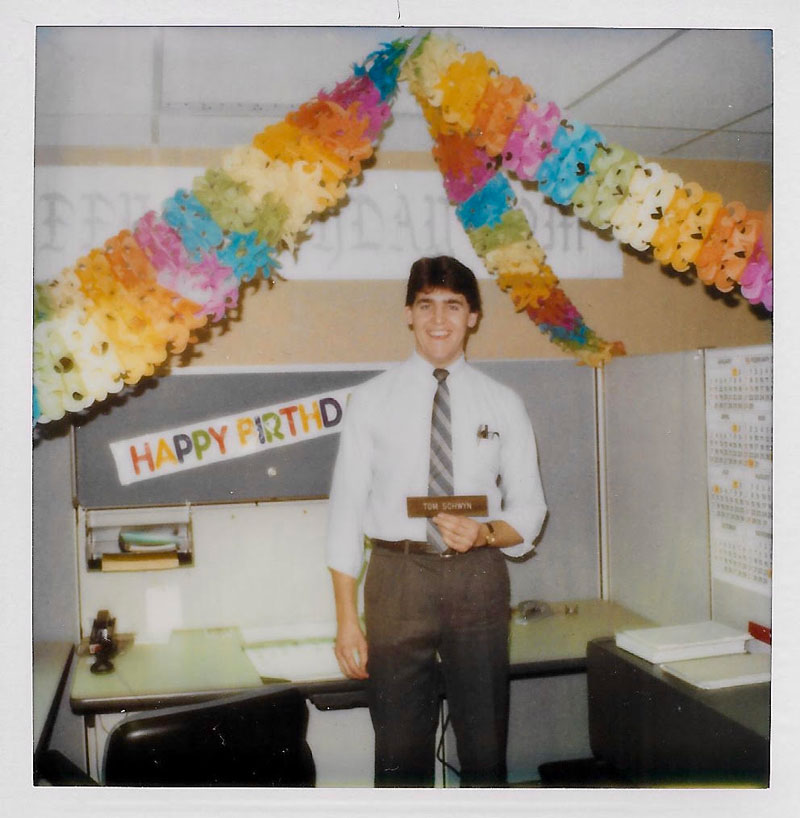 “I came here as a college student actually,” says Schwyn. “I was attending the University of Cincinnati, which had a co-op program where you had to get a job with a company to get experience as an engineer, so I worked every other semester at Whirlpool. That’s how I got to know Whirlpool.”

Schwyn became employed full-time with the company after he graduated as an engineer, taking a role in the dishwasher lab at St. Joseph Tech Center, spending a couple of years there as an engineer before being picked for a career development program called the Patent Engineer Program in 1989. That is also where he met his wife Tracy, who also worked for Whirlpool Corp. at the time in GIS (Global Information Systems).

“I think it boils down to always being able to do really interesting work and being surrounded by truly exceptional and nice people. At the same time, I have a great quality of life, a short commute home—I’m able to see my family for dinner at night—and I was able to get to kids’ sporting events. We love Southwest Michigan…

“I did some training under the patent lawyers for a few years, and then the company sent me out to Washington D.C. where I worked for Whirlpool during the day doing patent searches out of the U.S. Patent Office, and then went to law school in the evening at George Washington university.” After graduation, he returned to Benton Harbor to work as a lawyer for Whirlpool Corp., starting in 1994.

All of this work is quite different from what Schwyn thought he would be doing as an engineering graduate. “I had no idea that I was going to become a lawyer. I didn’t even know any lawyers. But Whirlpool gave me the opportunity to get my law degree and to take my engineering degree and do something a little different with it. It was appealing to me because this gave me an understanding of the legal side of Whirlpool, while still working with engineers and innovation.”

After working as a patent attorney for a few years, Schwyn took another career detour at that point and moved to Europe to work in Whirlpool Corp’s Italian office before coming back to do commercial legal work for the company’s North America Region. He was also a part of the Maytag acquisition team in 2006, “which was one of the highlights in my career,” recalls Schwyn.

He later went back to the patent team and was chief patent counsel for a few years. After that, he was General Counsel for North America. Since 2014, he’s been Vice President of Global Legal Operations, working with the chief legal officer, managing the business of the global legal function, working on functional strategy, processes, technology; and working to manage the costs associated with all the legal work that happens at the company. Other career highlights include working on several lawsuits against competitors, helping to guide the company through the COVID pandemic, and working on a Habitat for Humanity build in Georgia in 2003. 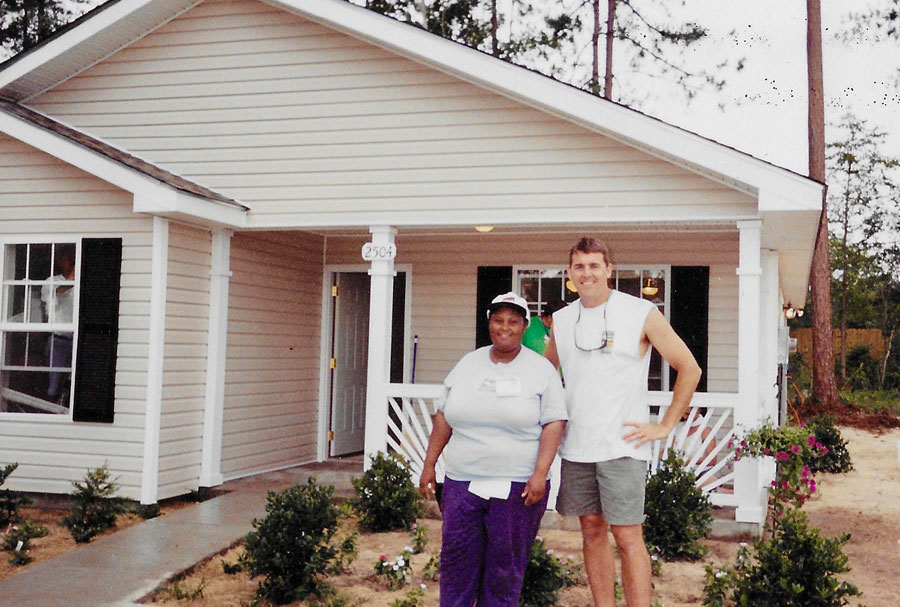 In the years he’s spent at Whirlpool Corporation, Schwyn notes that technology and how it is used is one of the greatest changes he’s witnessed. “When I joined Whirlpool, it was before email existed. We had mainframe computers for financials and engineering work, but there were no personal computers. We wrote and typed memos and sent them to each other through interoffice mail. It was different from the instantaneous nature of how we work today.”

When asked what made Schwyn stay at Whirlpool Corporation for his entire career, he says, “I think it boils down to always being able to do really interesting work and being surrounded by truly exceptional and nice people. At the same time, I have a great quality of life, a short commute home—I’m able to see my family for dinner at night—and I was able to get to kids’ sporting events. We love Southwest Michigan, and we have a boat. If the weather’s nice on the weekends, we’re on lake Michigan. We feel very fortunate for everything this area has to offer.” 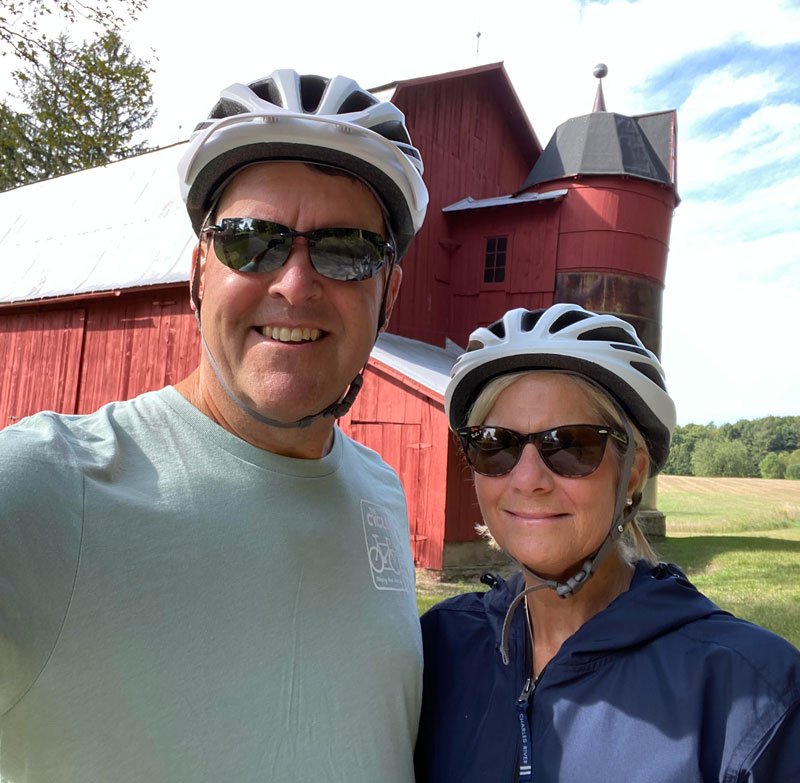 Schwyn has some advice for anyone who wants to have a long career at Whirlpool Corporation. “Have as much fun as you can and take advantage of interesting projects. I’m a person who likes variety, and I was able to become an engineer before moving to the legal team, and then within the legal team do six different things along the way. Whirlpool is full of opportunities like that. I encourage everyone to be open to new possibilities and reinvent themselves occasionally.”

His last day will be Dec. 31. After that, the future is wide open for Schwyn. “I have some things that I want to do more of, and things I want to do less of,” he jokes. “I want to do more things outdoors, in the sunshine, and spend more time on the water. We also plan to explore more bike trails around Michigan.”

“The things I plan to do less of are meetings and slides. I feel like I’ve reached my lifetime quota for creating slides. And I’m definitely looking forward to a more flexible schedule to do more traveling. We don’t have any firm plans. We love Southwest Michigan and plan to stay connected to the community, but we’re hoping to get away in the winter and enjoy some sunshine, beaches and bike rides in other parts of the world.”