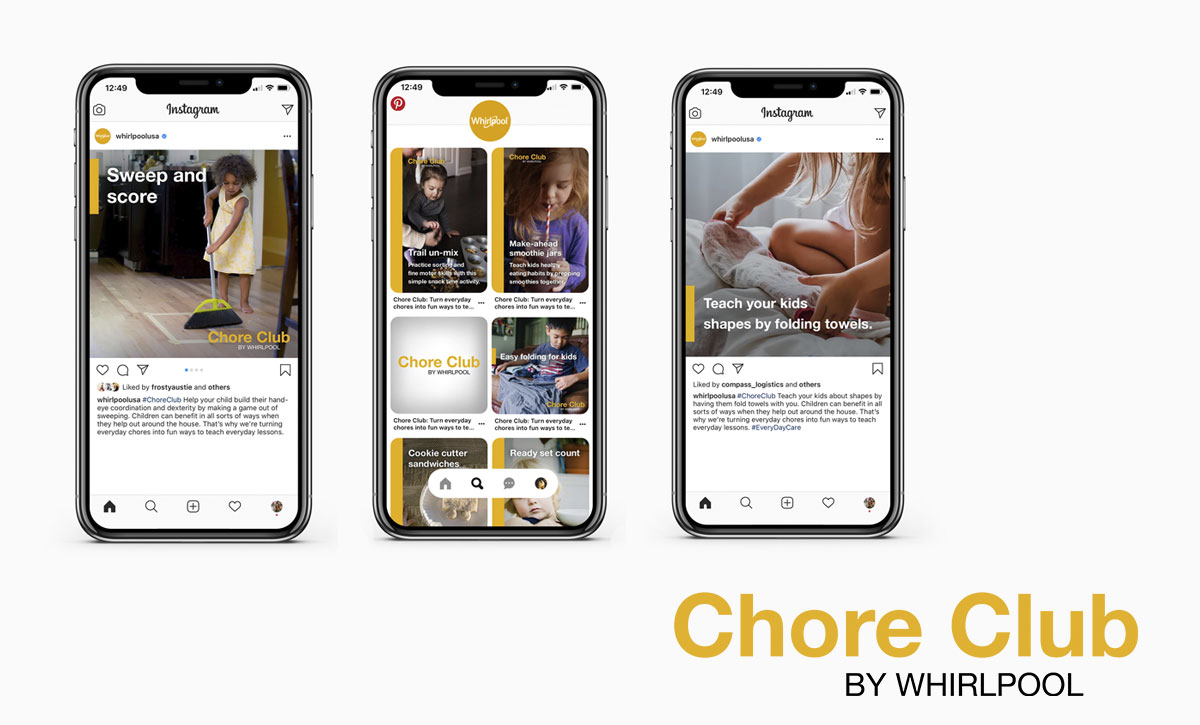 Chore Club by Whirlpool brand started in the spring of 2020 with an aim of encouraging children to do chores,  has become a finalist in the annual PRWeek U.S. Awards for 2021 in the “Best in Influencer Impact” Category. It joins other large, well known brands in the category, including Dove Men+Care’s “Pledge for Paternity Leave” and the “Got Milk? Swim Seen Round the World” campaign from the Milk Processor Education Program.

In total there are five campaigns nominated as finalists in the category, with the final award ceremony and announcement of the winners slated for March 18. The Whirlpool brand team worked with cross-agency teams at Digitas, Ketchum and ARS, with Ketchum being named as the co-nominee.

When April came and we still weren’t back at work and the kids weren’t back to school, we started to really understand through social conversations the struggle our consumers were facing…

“This was a true collaboration between the brand and our agency team,” said Whirlpool Brand Communications Manager Laura Fletty. “We are thrilled to be a nominee. We haven’t won yet, but we’re excited to have made it to the final group.”

The team first started to think about a possible campaign during the March quarantine, when kids began to attend school virtually and entire families were all at home together.

“When April came and we still weren’t back at work and the kids weren’t back to school, we started to really understand through social conversations the struggle our consumers were facing, many of whom were parents balancing working from home and the existing demands of their job while trying to serve as a part-time teacher to their kids and keep the household going at the same time,” said Fletty.

The brand also had research that showed kids who do chores from a young age are more likely to have academic, emotional and professional success later in life. Fletty said this gave birth to “a perfect opportunity to demonstrate the Care the Whirlpool brand is known for by providing resources to help parents make the chores of cooking, cleaning and washing a part of their children’s new stay-at-home learning routine.”

“Kids are normally so active today with school and other extracurricular activities that they aren’t taught to do chores as much as previous generations,” explained Fletty. “In fact, while 82 percent of adults reported having regular chores growing up, only 28 percent said they require their own children to do chores.”Chore Club by Whirlpool brand gave those children lessons in how to do chores around the home that entertained and educated them, as well as helping to prepare them later for adult life.

The social  campaign first lived primarily on Pinterest and on Instagram with organic content that created “snackable” tips and tricks on how to get kids between the ages of two and 12 involved in household chores. Each chore contained a lesson as well, teaching kids how fractions work by cutting up a pizza, or sorting laundry by color, for example. The team also collaborated with popular influencers Chelsea Hood and The Bachelor’s Sean Lowe to get the word out.

“We are so proud of how Chore Club by Whirlpool allowed us to provide support to our consumers in the early days of shelter-in-place, while simultaneously celebrating the dedication and sacrifice caregivers make for the ones they love each day.”