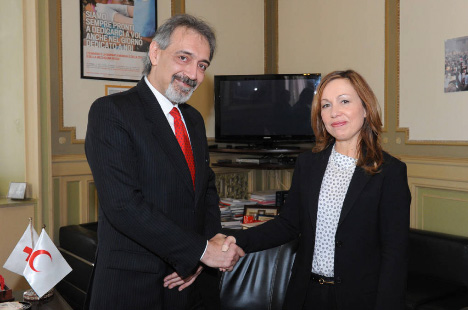 Currently it is estimated that there are 73 million migrants in the world, of which 43 million have left their home countries due to conflicts and violence, 15 million following natural disasters and another 15 million due to economic changes in their home countries. In 2014, 170,100 people arrived in Italy, of which 26,122 were minors. Out of the people that arrived in Italy, almost 107,000 men, women and minors traveled through the country directed elsewhere: the so-called “transiting migrants” that do not have access to medical services and are excluded from any medical check-ups, except for the one carried out upon their arrival in the port and the ones that they may encounter along their journey, for example, in the centers that the Italian Red Cross set up in Rome and Ventimiglia to respond to this phenomenon. In 2015, the Italian Red Cross received, upon their arrival, more than 143,000 migrants, guaranteeing the presence of 2700 volunteers. More than 150,000 migrants arrived in Italy during 2015, while in Europe the number reached one million.

As was widely expected, the number of migrants landing on Italian shores did not come to a halt also in the beginning days of 2016, despite adverse weather conditions. From the beginning of the year to today, about 2600 migrants arrived in Sicily and were aided by the Red Cross.

The Italian Red Cross, with its network of 130 thousand volunteers, is present all throughout Italy. From the arrival of migrants to their reception, the Italian Red Cross provides, together with the Ministry for Health, medical assistance and guarantees psychosocial and linguistic support as well as helps reunite family members separated during their journey at sea or in Italy through the RFL (Restoring Family Link) service. The same type of assistance is provided and guaranteed by Italian Red Cross operators and volunteers in the approximately 70 reception centers located throughout all of Italy, that in 2015 received about 4,000 people.

“In the last year – said the National President of the Italian Red Cross, Francesco Rocca – we increased our presence on site and improved our response efforts to this crisis. Our efforts have been recognized, so much so that we can now count on the help and contribution of several companies, such as Whirlpool, which we are particularly grateful for the solidarity offered and for the real help which is of great support for us, considering the difficulties we face every day. As the Italian Red Cross we will continue to make our voice heard in order to put human beings first but at the same time I hope to be able to continue to count on effective collaborations as the one signed this morning”.

The first centers touched by this initiative are: Rome, where, since last Summer more than 2,500 people transited, before in the camp set up next to the Tiburtina train station, and now in the facility in Via del Frantoio; Bresso (Milan) in the Center for Training and Emergency, where also the hub of the Lombardy region operates, where about 3,500 migrants every month transit; and Ventmiglia (IM), where, since last June, the Red Cross is providing daily assistance to almost 200 migrants transiting towards Northern Europe.

Whirlpool Corporation’s social responsibility model.
Whirlpool Corporation has always been involved in promoting a social commitment and sustainable development model in order to create a better community, by supporting initiatives aimed at guaranteeing and protecting the health and needs of the community. In 2014, 41% of Whirlpool employees dedicated their free time to volunteering activities, donating more than 300 thousand work hours to projects supported by the Group. Whirlpool supports more than 300 international, national and local associations through donations and volunteering initiatives. In 2015, the Group ranked among the 100 Best Corporate Citizens according to the Corporate Responsibility Magazine, having received high scores in the following categories: Human Rights, Relationship with Employees, Corporate Governance and Philanthropic Works. The Reputation Institute included Whirlpool Corporation among the 100 Global RepTrak® of 2015, a ranking of the reputation of the 100 most appreciated companies in 15 countries.

Italian Red Cross.
The Italian Red Cross is one of the biggest volunteer-based associations in Italy with a network of 130 thousand volunteers and 10 thousand means distributed across the country. Its reach is so widespread that the association is able to provide rapid response times. In times of peace, the association carries out social, medical, assistance and first aid activities and services. In times of conflict, the association supports the population and to meet the needs of everyone, impartially, in Italy and abroad, by carrying out medical and assistance activities, helping in the search for the dispersed and favouring the reunification of families. One of the main tasks of the Italian Red Cross, which is part of the Civil Protection national system, is to act in case of crises or natural disasters, intervening with volunteers and means. First Aid and medical transport as well as Paediatric Life Saving Manoeuvres, carried out with state-of-the-art means and equipment, are the most known activities. The Italian Red Cross has its own specialized units in special aid, such as sea and mountain rescue. Additionally, it also has its own Dog Unit. The association also has a Rescue Team for Psychological Crises, a crucial support system for people involved in disasters. The Italian Red Cross always stands beside those who are most vulnerable and actively helps receive migrants, supports the homeless and families with economic difficulties. Last year the Italian Red Cross responded to 4 million help requests and provided support to hundreds of thousands of people in difficulty throughout Italy by providing them with food, medicine, glasses, medical equipment and scholastic materials for children. In certain cities in Italy, the Italian Red Cross has also opened anti-violence centres for women victims of abuse. In the last months, the Italian Red Cross was actively involved in the rescue operations following the flood in Benevento, the earthquake in Nepal last April and during the Ebola crisis.