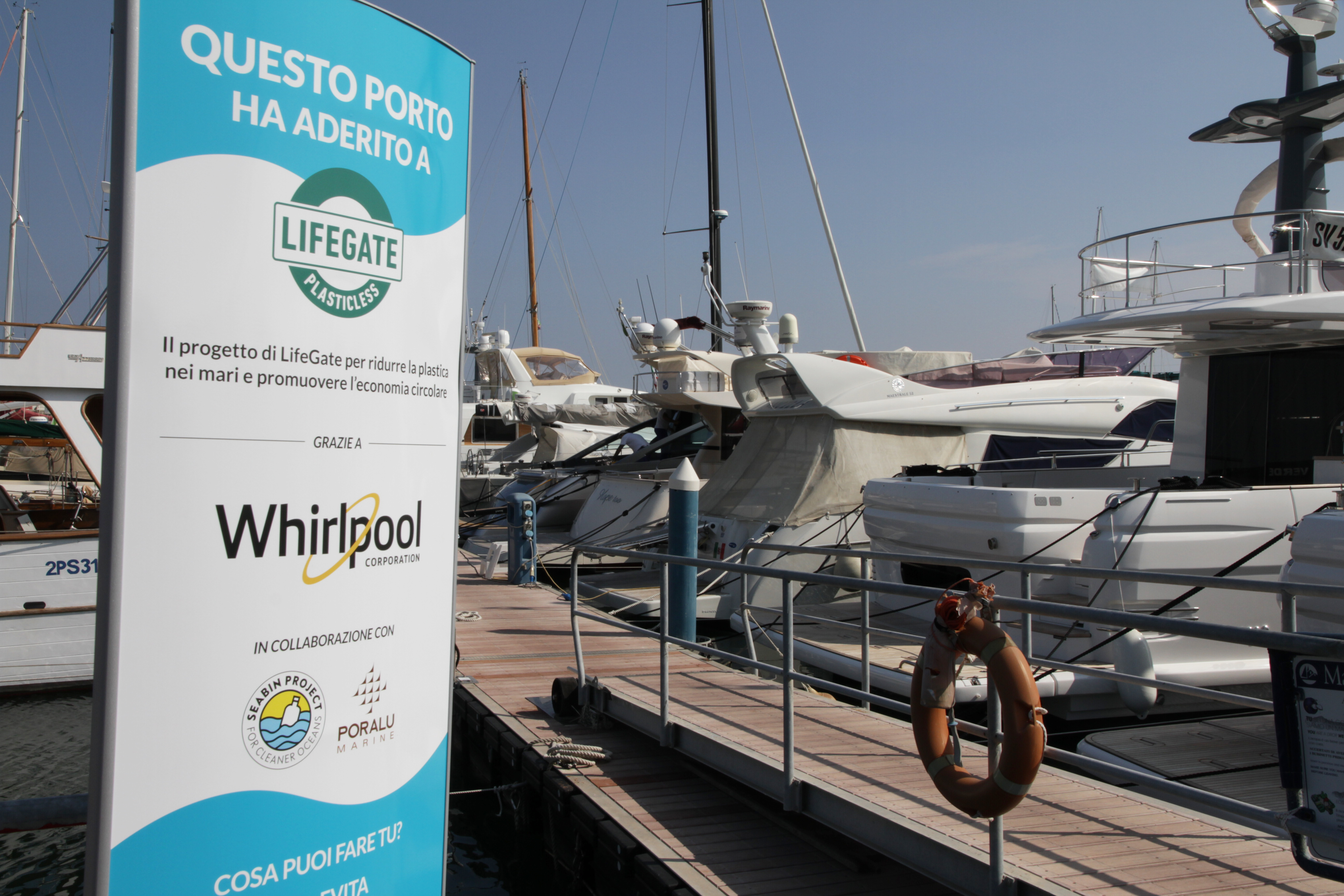 Stopping marine pollution is possible. And it must be done. Firmly convinced of this, Whirlpool EMEA (Europe, Middle East and Africa) announced during a presentation today that it is joining #PlasticLess, an ambitious project to reduce marine plastic pollution promoted by LifeGate, the main platform in Italy on sustainability issues. The presentation was held at the port of Fano and attended by Angelo Sciapichetti, Counsellor for the Environment at Regione Marche, and Massimo Seri, Mayor of Fano.

#PlasticLess aims to collect plastic waste from Italian seas using innovative devices installed in the waters of its ports and marinas, as well as to promote a circular economy model designed to reduce, reuse and recycle waste, especially the most dangerous kind for the environment like plastic. 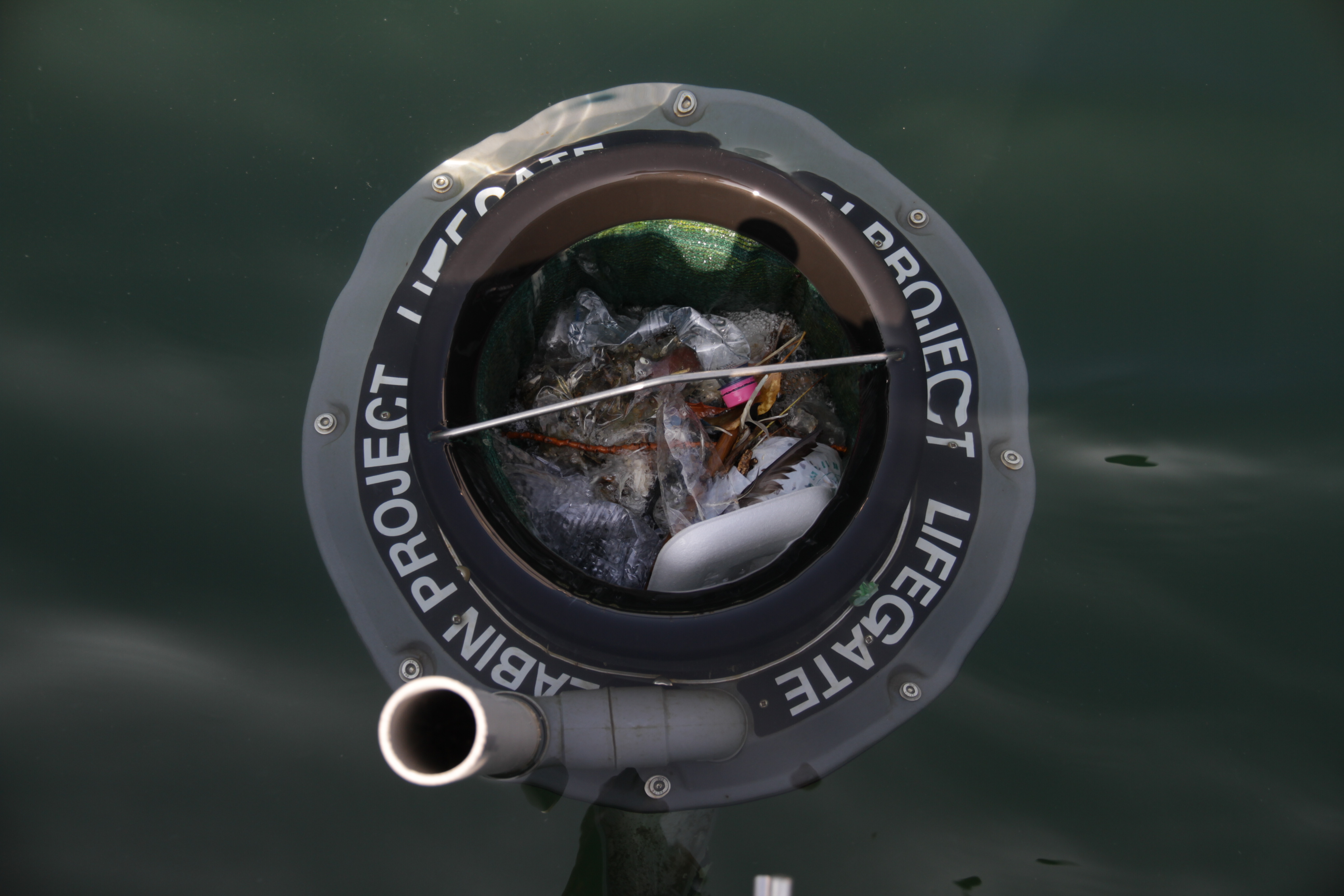 Hon. Patrizia Terzoni, Vice-President of the Chamber of Deputies’ Environment, Territory and Public Works Commission, commented the initiative: “The Mediterranean Sea urgently needs to be freed from the plastics and microplastics that are polluting and suffocating it. Whirlpool’s support, which consists in giving our sea two Seabins, reflects the company’s commitment towards the environment. The Government will also play its part in this titanic struggle: by the end of September we will come up with a draft law to protect the sea from plastics. Today, 50% of the catch is plastic and without regulation fishing boats are throwing this plastic back into the sea. Our idea is to encourage them to take these pollutants to recycling centers, thus enormously contributing to cleaning up the sea: a simple but effective idea that will bring new momentum to a global battle in which Italy must play its part.”

“With #PlasticLess we want to respond to the challenge of freeing our seas from waste in a proactive and concrete manner, bringing real benefits to the society and communities where the sea is a crucial asset for their development and wellbeing” – explained Alessandro Magnoni, Senior Communication Director and Government Relations, Whirlpool EMEA – “As a world leading corporation, it’s our duty to commit, on a daily basis, to guaranteeing the best possible future for our planet and for future generations. We’re hoping that other companies will decide to follow us in this project: together we can achieve a lot.” 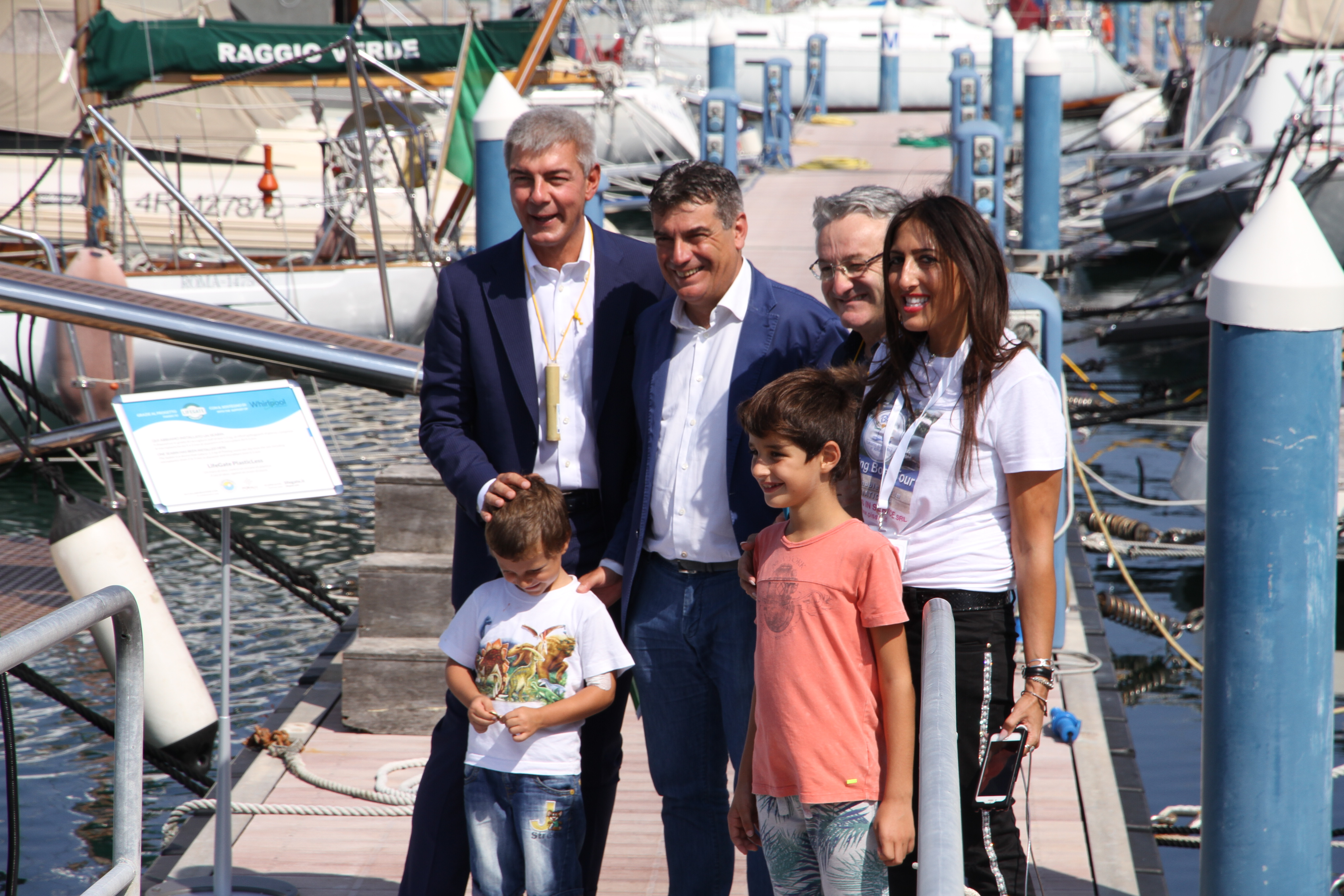 Whirlpool has “adopted” two ports in Italy, both in the Marche region: Marina dei Cesari in Fano (Pesaro) and Circolo Nautico Sambenedettese in San Benedetto del Tronto (Ascoli Piceno). Here the company will install the Seabins, innovative devices that float on the water in certain debris accumulation points and will work round the clock to capture over 500 kg of waste a year, from plastic bottles to microplastics measuring from 5 to 2 mm in diameter and micro-fibres that are 0.3 mm or smaller, not visible to the naked eye.

“Marine plastic pollution is becoming an increasingly insidious problem: this is why Regione Marche recently passed a law to combat it” – stressed the Counsellor for the Environment at Regione Marche Angelo Sciapichetti – “We’re encouraging the collection of waste in ports and preventing discharge into the sea by promoting new and more sustainable fishing technologies and techniques. We have given incentives to fishermen to bring ashore the waste they catch accidentally. So we’re very happy about Whirlpool EMEA supporting the #PlasticLess project, as it will help us achieve one of our priorities.”

“The challenge to protect the environment should be among the first objectives of an administration and of every single citizen” – affirmed Massimo Seri, Mayor of Fano – “For this reason our Municipality has always been committed to implementing measures to safeguard the ecosystem, such as the projects for bathing waters and monitoring river mouths, which have allowed us to obtain a primary role in the “Italy-Croatia” program. We therefore welcome initiatives such as PlasticLess and, as the Administration, we will do our best to support and encourage them. I am particularly proud that our Marina dei Cesari has been chosen to host the Seabin, a port which we have strongly believed in. I welcome Whirlpool and LifeGate, with the hope that this can represent a first step in that path of awareness that will accompany our city in the future.”

To further raise awareness around the serious challenges posed by pollution and disseminate a culture that respects the sea, during the event the “Environment and Sea” Environmental Education Centre organized workshops and other educational activities for kids in which games are employed to teach the new generations how to use and dispose plastics properly.

“There is an increasing global concern about the pollution of our oceans caused by plastic, which is extremely harmful and dangerous for the entire ecosystem” – explained the CEO of LifeGate, Enea Roveda – “Our initiative aims to promote a circular economy with a campaign to raise awareness and provide instruments to those intending to share with us in such an important mission as that of reducing the amount of plastic in our seas.” 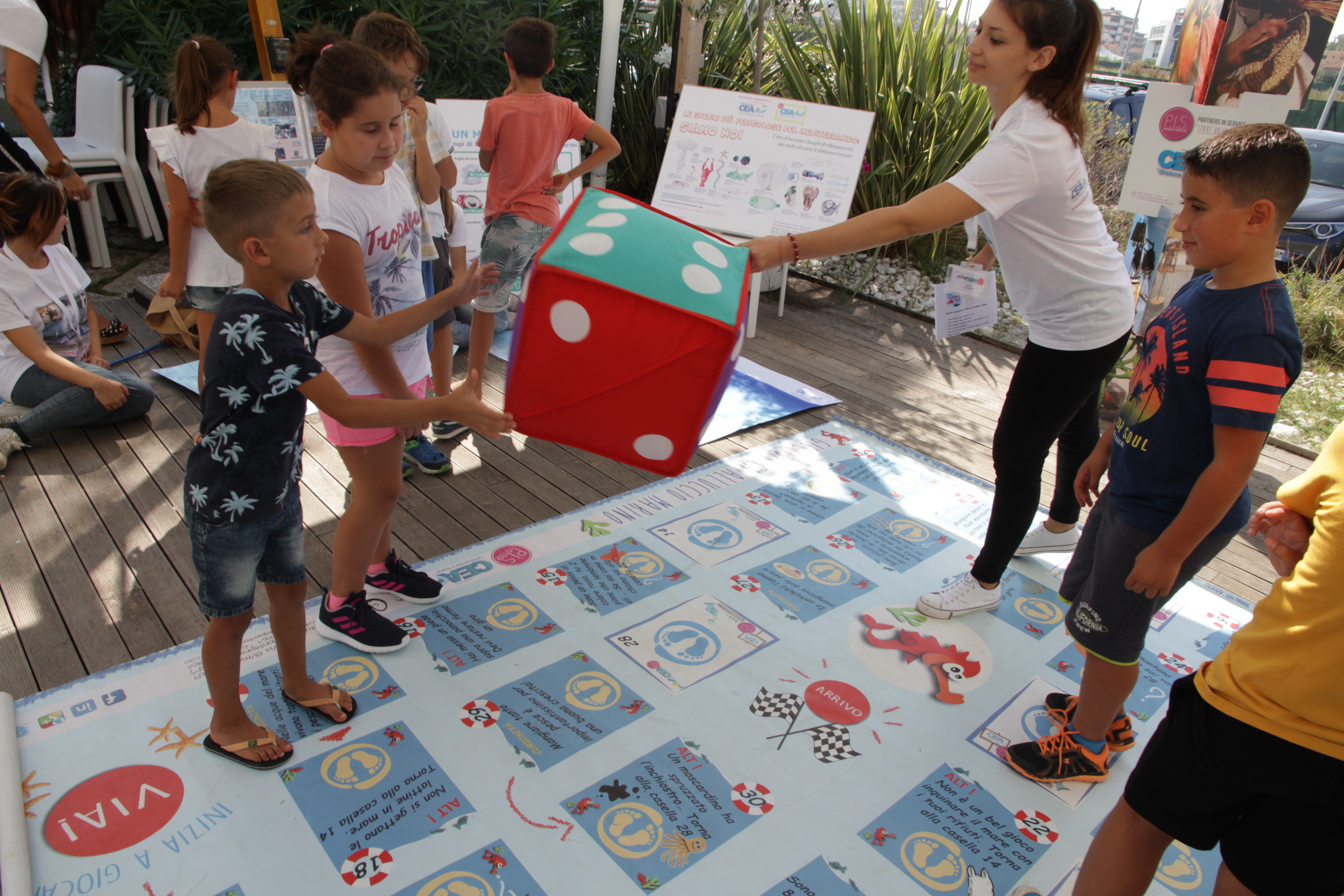 But what is the state of pollution of the Mediterranean Sea? According to UNEP, the United Nations Environment Programme, it’s one of the most affected areas: on its seabeds there are up to 100,000 variously sized fragments of plastic per square kilometre. And this statistic, according to ISPRA (Istituto Superiore per la Protezione e la Ricerca Ambientale), rises to 1.2 million per square kilometre if we also consider microplastics, one of the highest concentrations in the world.

Plastic waste in the Mediterranean is therefore an emergency that must be dealt with as soon as possible: 731 tonnes of plastic waste are dumped into our seas everyday, which could double by 2025. Italy, with its 90 tonnes, is the 3rd most polluting country in the area.

The causes of such pollution range from poorly organized waste collection and management to production activities, from seaside tourism to activities in ports and negligence by many people, who are responsible for the tonnes of plastic that end up in the sea everyday. The most insidious debris are microplastics, fragments measuring less than 5 mm in diameter, which are increasingly present in the seas. As they stick to algae, they are swallowed as food by fishes which are then served on Italian tables.

According to a research carried out by Altroconsumo, among 102 samples of sea salt and frozen mussels, shrimp, langoustines and striped prawns, some 70 samples contained microplastics. And in species like swordfish, red tuna and longfin tuna, microplastics are present in 18% of cases, according to a study by Ispra on 121 samples of high commercial value species.

Whirlpool against plastic pollution.
Whirlpool’s corporate social responsibility commitment aims to create a virtuous system through initiatives that ensure and safeguard the wellbeing and the needs of the environment and communities where the company operates. In June the company successfully responded to the EU Commission’s invitation to come forward with voluntary pledges on reducing plastic waste and boosting the uptake of recycled plastics in its products’ components. Whirlpool thus restated its determination to play an active role in implementing the European Strategy against plastic waste, which is designed to safeguard the environment against plastic pollution and to promote a circular economy model as a vehicle of growth and innovation.

Moreover, Whirlpool EMEA is committed, along with its partners, in a program to eliminate disposable plastics in its sites and offices, including the company’s canteens, starting from its Headquarters in Pero (Milan). All disposable plastic items, such as bottles, glasses, food containers and cutlery, will be replaced with alternative and more sustainable solutions, thus contributing to both waste reduction and CO2 emissions abatement.