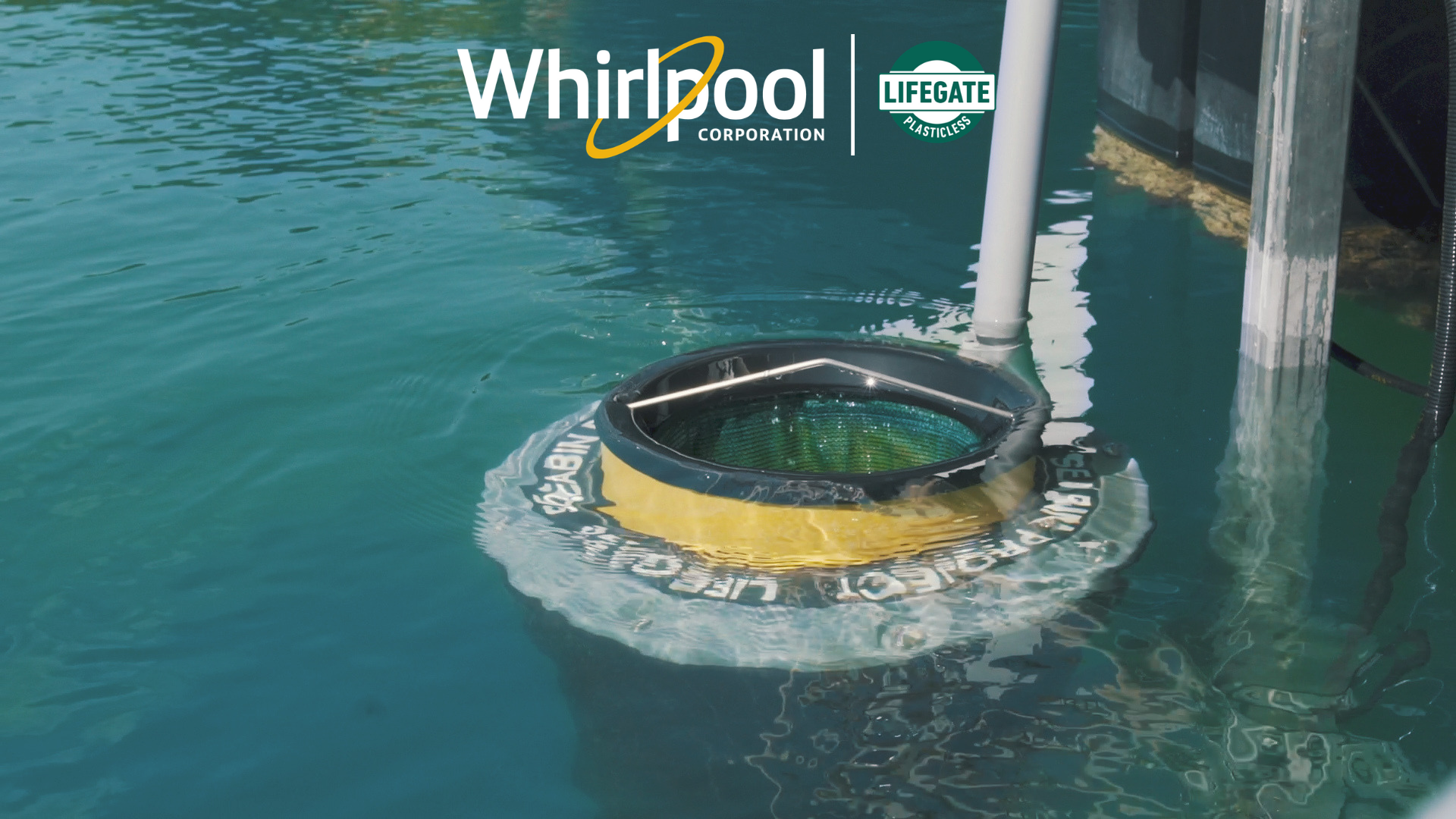 For years a frontline promoter of circular economy and environmental sustainability, Whirlpool EMEA is carrying forward its support for LifeGate PlasticLess®, a project designed to safeguard the health of the sea and combat the pollution of water in ports and yachting marinas by plastic waste.

The 11 new Seabins installed in 2019 under this project work round the clock to capture around 1.5 kg of plastic a day, the weight of 100 bottles, or over 500 kg of waste a year, including microplastics from 2 to 5 mm in diameter and microfibres as small as 0.3 mm, which get caught in the algae that fish ingest, thus entering directly into the food chain.

To understand how much waste these devices are collecting everyday, just think that in the waters of just two marinas – Marina dei Cesari at Fano and Circolo Nautico Sambenedettese at San Benedetto del Tronto – the Seabins installed in 2018 have so far helped collect over 400 kg of floating waste, the weight of over 26,000 half-litre plastic bottles, not to mention straws and bottle tops, cigarette ends, bits of polystyrene, food wrapping (eg. snack packaging) and mussel nets.

Key factors in the phenomenon of marine pollution are the winds and currents that by transporting floating waste help turn ports into veritable rubbish dumps. During adverse weather conditions, such as storm surges, ports are literally invaded by various debris and, given the increasing frequency of such phenomena driven by climate change, Seabins are becoming crucial allies in the struggle to rapidly restore clean water conditions.

Once captured in the bins, the waste is collected and disposed of by waste management operators selected by municipal authorities. It is this engagement of municipalities in the project that is producing major results in terms of raising awareness amongst citizens and public administrations, also for the purpose of improving performance in the reduction of plastics under the “Plastic Free Challenge” launched by the The Ministry for Environment, Land and Sea Protection of Italy. This competition, along the lines of the Ice Bucket Challenge, is in fact designed to get as many citizens, businesses and public authorities to commit to eliminating throw-away plastics.

“We’re proud to be carrying forward our support for the LifeGate Plasticless® project and to have installed Seabins along Italy’s coasts. This initiative is perfectly in line with our sustainability strategy and Whirlpool’s commitment to circular economy,” said Karim Bruneo, Corporate Responsibility and Government Relations Manager, EMEA. “Our policies and initiatives are not limited to product and process innovation: they also look to engage citizens and the communities where we operate. One of the projects we’re proud of is our joining of the campaign promoted by the European Commission, under which, by 2025, we will be using over 44,000 tonnes of 100% recycled plastic in the components of our home appliances.”

Whirlpool EMEA’s participation in the project, which has led to the installation of Seabins in 13 Italian ports and yachting marinas to date, is an example of a concrete solution to a problem affecting the whole of Italy, a country that dumps 90 of the 731 tonnes of plastic that ends up in the Mediterranean everyday, according to the UN environment programme UNEP. Also according to UNEP data, Italy is the 3rd biggest contributor to pollution in the Mediterranean, where 7% of the globe’s microplastics is concentrated, making it one of the worst affected regions in the world.

“We’re extremely proud to be working alongside Whirlpool, an enterprise seriously committed to sustainability and reducing plastics,” said LifeGate CEO Enea Roveda. “On joining our LifeGate PlasticLess® project, Whirlpool engaged 13 Italian ports, from the north to the south of the country, thus giving nationwide visibility to our challenge to clean the seas of plastics. We therefore believe that thanks to Whirlpool we will be able to obtain major environmental benefits and continue to raise awareness amongst the public, who can play an active part in change towards a “PlasticLess” future.

Thanks to the collaboration between Whirlpool EMEA, LifeGate and technical partner Poralu Marine, which produces the Seabins for the LifeGate PlasticLess® project, the following ports and yachting marinas now have these waste-guzzling devices:

Focusing on Italy so far, the Seabin project will be extended to the UK and France in the coming months. 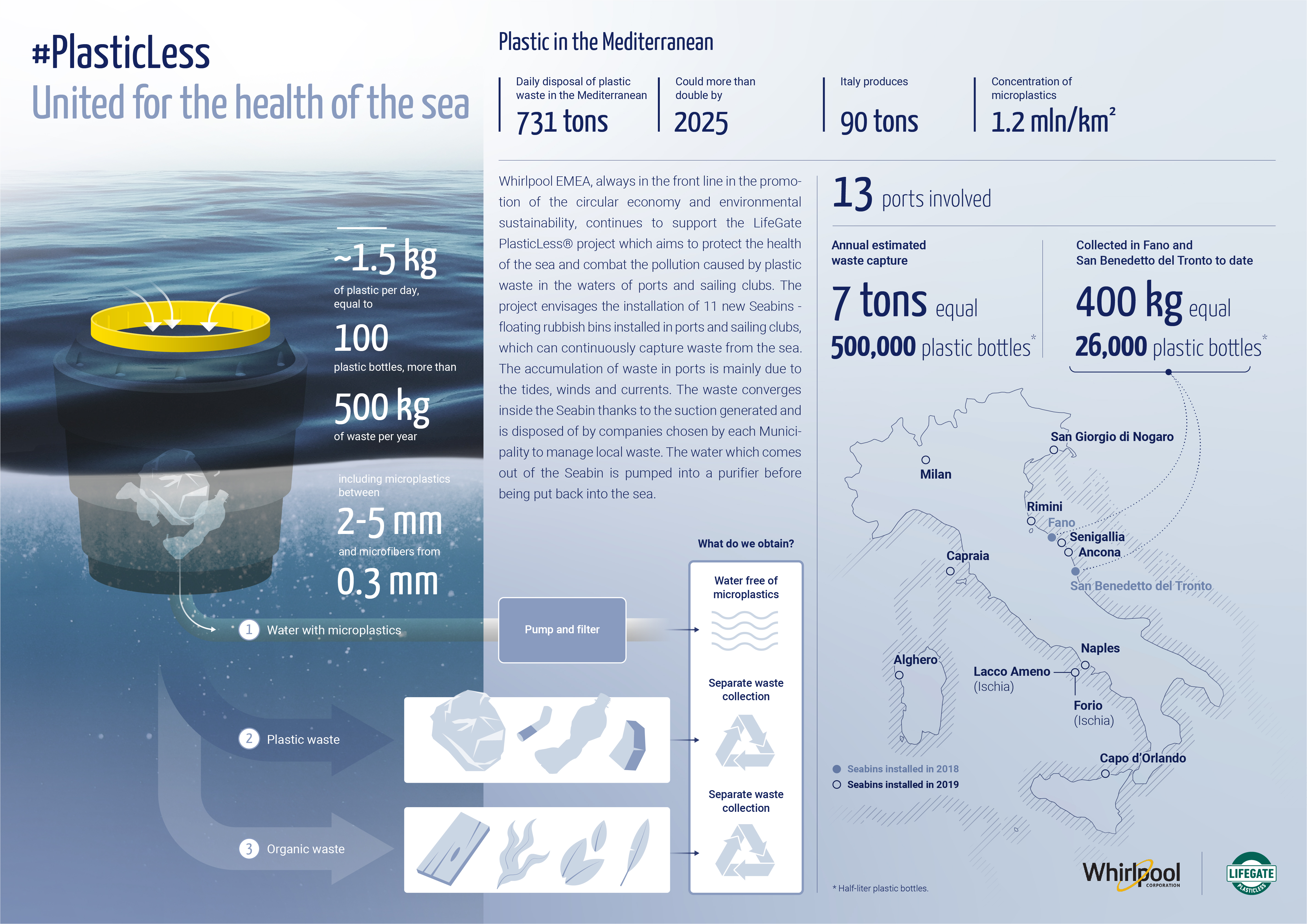