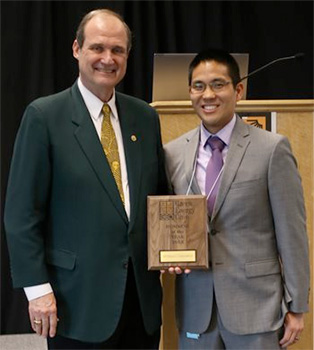 “Whirlpool Corporation has a 46 year commitment to sustainability — long before it became the norm.” Funk said while accpeting the award. “We incorporate sustainability programs into our products and processes while nurturing the communities where we operate, delivering value to our consumers and reducing our environmental impact.’

“Many of you know that in June 2015 we broke ground on a wind farm near our Findlay plant. I’m pleased to share that the wind farm is up and running. Through clean, renewable energy producing zero greenhouse gas emissions, the turbines are currently providing about 20% of the plant’s electrical needs.”

Click here to read a profile of the wind farm in the Winter 2015 GEO News Magazine.

Past GEO Business of the Year Award Recipients: