Whirlpool Corporation’s ISC PMO/Strategy Senior Manager Jay Hardman has found an interesting way to engage with students at the Kelley School of Business at Indiana University — by having them participate in a Habitat for Humanity house build on campus. The build, which took place in the week leading up to IU’s homecoming weekend, is the ninth one that Whirlpool Corp. has sponsored at the campus.

“That was the fourth build that I’ve been part of,” said Hardman. “It’s a great opportunity to connect with faculty and students. This year, we’ve been working with some of the faculty on how we can engage more in the classroom and get additional exposure to the students in a way that is more than just having a booth at a job fair.”

A group of about 15 Kelley School students from a supply chain group donated their time during the 10-day build. The home was constructed on a trailer, and once completed, was moved to the location where the homeowner would take residence. There, it was to be dropped on the foundation, and will have the finishing touches completed such as insulation, wiring and plumbing. The family will move into the home sometime around Christmas.

A brunch celebration was held after the home dedication on Saturday before the homecoming football game. After the dedication, the new homeowner and volunteers had their pictures taken on the football field that were shown during the halftime. 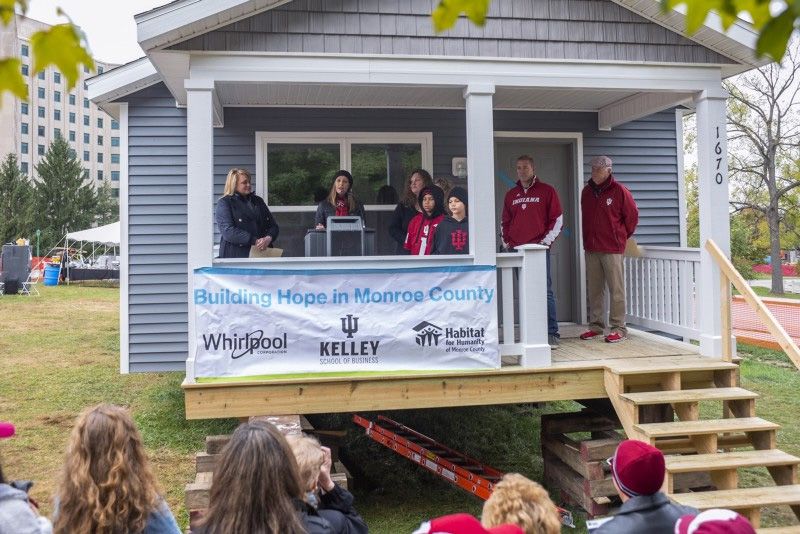 The dedication ceremony for the Rose family Habitat for Humanity home

“It’s unbelievable to me the kind of support Whirlpool Corporation gives with a refrigerator and range for every Habitat home, and committing more than $107 million since 1999,” said Hardman.

Student volunteers also earned some valuable experience, according to Hardman.

“Students had the ability to learn from people who have built many Habitat homes. These are skills that they can apply when they have their own homes. They also get a sense of accomplishment when they see the completed home.”

Additionally, many of the volunteers were able to work side by side on with the homeowner, Stephanie Rose. “I think the students got a chance to get to know her which also had an impact,” said Hardman. “She’s a single mom with two kids and she explained why she’s so appreciative of the volunteers, Whirlpool, and Habitat, and told them this is an opportunity for her to get into a home that she otherwise wouldn’t be able to afford. It was very moving. It definitely makes the experience come full circle for the students and other volunteers and makes the whole experience more real.”