What’s a kitchen got to do with it? 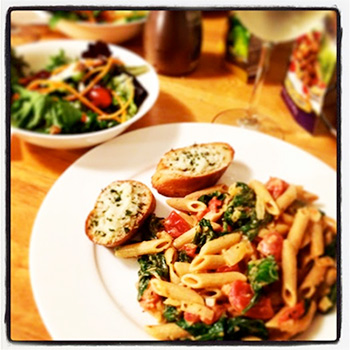 As a single woman in my 30s, I can’t say I had much of a relationship with my kitchen. I never really thought about it. It was there to get me fed quickly and with as little mess as possible.

Cooking for one generally means microwaving a bag of vegetables and rice or something. Making an actual meal was a commitment to eating the same thing for the next 4-6 days straight or tossing a large portion in the garbage.

About a year ago, I began a romantic relationship with someone. In the beginning, that meant going out a lot and eating out a lot. In an effort to save money, we started an initiative to cook more at home.

I’ve never been sentimental in the kitchen. I’m pretty sure there’s a direct correlation between the butter content of a meal and the amount of love for the family when my mom is cooking. My sister would tease me about keeping the “staples” in the house like potatoes and flour. At that point, I’m sure neither of those things had crossed my threshold and seriously, what’s a roux and why would you even want one? 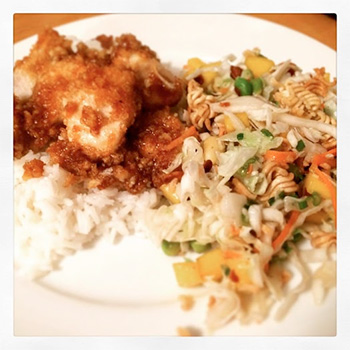 So the great kitchen experiment began. We started off slow with premade “put the bag of stuff in the skillet for 12 minutes kinda things.” We made a few easy standards like tacos or chili. But then things escalated quickly.

The Pinteresting began (and obligatory Instagramming). Pretty soon it was creamy tomato and spinach pasta, chicken enchilada rice casserole, creamy garlic penne pasta, goulash, and the most labor intensive, the baked honey garlic chicken with a side of crunchy asian ramen noodle salad. Don’t get me started on the cookies and desserts.

At first, I wanted to do it all myself but my sweetie would always ask what he could do to help and look bored just sitting there so eventually I relented. I started off with just giving him a job or two but pretty soon we were equal partners in most meal creations.

I wouldn’t say that we saved any money. Grocery bills could get just as high as a dinner out. But there were a few things I noticed: 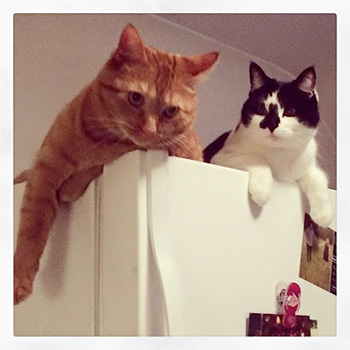 Appliances became more than anonymous boxy storage containers. They were more than rock from which my cats surveyed the vast expanse of their domain. They became the tools of our craft, our laboratory, a source of entertainment. And best of all we were spending much less time with the freezer and microwave and a lot more time with the produce drawers.

We learned about teamwork and that any job is easier when you can divide and conquer. We gained confidence–recipes are just instructional guides and we can read words so how hard could it be? We even learned a little chemistry–turn up the heat to get the cornstarch to thicken the sauce, DO NOT add more cornstarch!

I also noticed a change in myself. The kitchen was no longer a place of utility and function. It’s where we laughed and drank wine as we learned from our mistakes as well as our triumphs. A meal was barely complete before I started thinking about what we could try next. 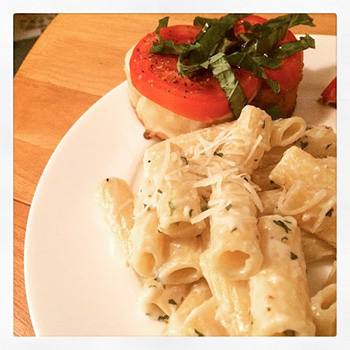 But more than just being the site of an experience, the kitchen became a place where I felt like I was creating something bigger. I was caring for someone by creating a meal that provided nourishment and enjoyment. We’re establishing the traditions of our future family (and I really want that KITCHENAID® WAFFLE BAKER so that “Sunday waffles” can be one of those traditions).

I’ve certainly been in relationships before but by taking my relationship to the kitchen, I’ve never felt more in love.