They Clean Up Nicely

Meet Some of the Affresh Brand Team 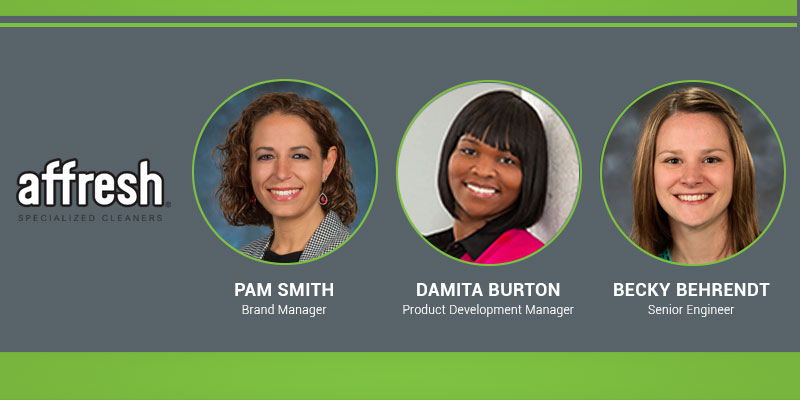 Affresh Brand Manager Pam Smith Managed P-O-P, then MBA, now CPG
Pam Smith started her career at Whirlpool Corporation in 2004 and has spent almost two years on the Affresh brand. “I started in KitchenAid licensed products handling packaging for utensils, gadgets, cookware and bakeware,” she said. “I had a couple of different roles in the licensed products group. Later I took the P-O-P lit manager role in KitchenAid major appliances. I managed the catalogs, in-store displays and all the P-O-P in store. I also worked on the large freestanding displays that we have with Lowe’s, Home Depot and some of our other key accounts.” 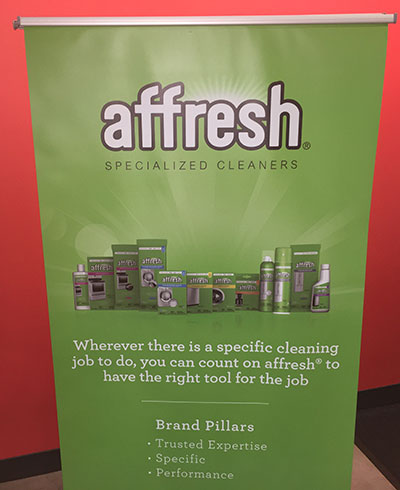 Smith later worked in channel marketing and pumped up the education section of her resume. “I worked on the Home Depot channel for three years. During that time I went back to school at Western Michigan and got my MBA. While in that role, we launched KitchenAid at Home Depot in the summer of 2014. It was fast and furious. I think we had to get stores ready and set up to go in just 8 weeks.”

All of this previous experience has helped Smith in her current position. “This role brought together all of my learnings from all of the other ones,” said Smith. Affresh has a smaller, more tight-knit team that all have line of sight with each other. “My role now is a lot more broad, which makes it fun because I get to touch every aspect of the business and can answer to all of it, so I’m making decisions on multiple parts of the business and I can make trade-offs if they are needed.”

Each role she has held over the course of the last 13 years has helped shape the way Smith does her job today and informs her decisions on the Affresh brand. “With each position I’ve held here there are different challenges, but I think you have challenges in any role. It’s just about adjusting to a different way of thinking.”

Affresh Senior Engineer Rebecca Behrendt Finds Right Formulas for Success
Rebecca (Becky) Behrendt has been with Whirlpool Corporation two years, both of them working on the Affresh brand. In her role, she gets to really know what the brand’s products are made of. “We don’t develop the chemistry in house,” she said. “That’s all done by our suppliers. I work with a supplier to develop the best formula that meets our target performance requirements. I’ll receive samples and I test them and then have them make any sorts of modifications to improve them.”

This testing takes place at the IBU lab at the St. Joseph Tech Center Annex. “We have to make sure that these products don’t damage any of the appliances we use them on, so we do pretty extensive material compatibility testing as well,” said Behrendt. “Testing is a really big portion of what we do and important in the CPG space for developing our claims. All of our packaging claims have to be verified to prove that it does what we say it does.”

Prior to coming to Whirlpool Corporation, Behrendt’s background was working as a consultant in the pharmaceutical industry. She enjoys her new role because it’s a departure from consulting in many ways. “Here it’s a lot different because the products we work on, I get to see developed from beginning to end. And with how small of a team we have, I get to work very closely with the business side and I get to see all the brand work that Pam does and I get to see all that the sales group does. It helps me understand a little bit more about how to go to retail with a product. I would never have known that before.”

It’s that greater “ownership” of the product, among other things, that Behrendt enjoys in her current role. “I like having that ownership and say in what happens,” she said. “Another thing that was appealing for me to come to Whirlpool was that it was really impressed on me how much employee development there is and how much they encourage people to try different roles.”

Affresh Product Development Manager Damita Burton Never Stops Launching
“I’m responsible for coming up with the strategy for the overall product plan, which typically goes three to five years out,” said Burton. “I also execute the current year’s projects. We don’t have our own consumer insights team, so I’m responsible for our consumer insights work.” Brand Manager Pam Smith and the brand’s agency also provide some insights. Burton uses this consumer insight information to develop where Affresh expands its portfolio of products, with a plan that reaches years into the future.

Burton is new to Affresh but has been with Whirlpool Corporation for years in other roles on the engineering and manufacturing side, and will celebrate her 10-year anniversary in February. “When I joined the team in June last year they had already identified some areas where we didn’t have product in the specialty cleaner space,” said Burton. “It just made sense for us to introduce products in those spaces.”

This development includes introducing products not currently in the Affresh line as well as reformulating and improving existing products. 2017 launches included a stainless steel cleaning mousse and spray, disposal cleaner and cooktop cleaning wipes. Seventeen new SKUs were introduced this year (including different count packaging of the same product). All of the brands products were re-launched to reflect the new brand identity, colors, and packaging.

Affresh pioneered the space for products that clean the appliances that clean our clothes and dishes from the inside out, and the competition has gotten on board during the last decade or so that the brand has been in existence. This makes having a team that works together to create the right strategy and the right products critical to success. “We rely on our suppliers to deliver the product at a certain level of specifications,” said Burton, “and we make sure that happens through performance testing and materials testing.”

Even though the Affresh team has done a major relaunch this year, they don’t have time to rest on their laurels. They’re already working on new launches for 2018, along with a new website and marketing campaign. With everything that’s going on, it helps that everyone on the team is working towards a common goal, according to Burton. “We work closely together to offer an overall comprehensive portfolio for consumers,” she said, “because we want the Affresh brand to be the ‘one stop shop’ for specialized cleaners.”