One Step at a Time for Tim Warren 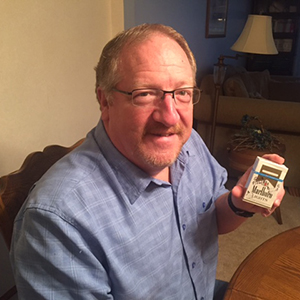 I started smoking when I was 21.  I smoked 1-2 packs a day and thought I was invincible and could quit whenever I wanted.

Competition was a big part of my life growing up.  My twin brother and I were competitive at everything, including sports.  After graduation he went into the Air Force and I stayed home, went to school and scored a great job at Whirlpool, following my dad’s footsteps.  I knew my brother would start smoking in the service, but I never thought I would. When I did, I just thought it was a phase and I could quit at any moment.  I fooled myself. When I tried to quit, my temper would flare up after 4 or 5 hours without a cigarette.  I got pretty good at quitting.

I had watched my father battle emphysema and get hospitalized with pneumonia in 2003.  He needed a tracheotomy and wasn’t able to talk.  It made him extremely frustrated.  As we watched him suffer, my older sister, brother and I would smoke on our way in and out of the hospital. My wife would ask us how we could watch our dad suffer, knowing smoking was to blame.  We would laugh and make jokes about it.  His health never improved and passed away shortly after.  That’s when the joking stopped.

One day, my daughters were talking to me and said that they didn’t want to see me end up like grandpa, in a hospital bed with tubing down my throat. The more I thought about it, the more it hit home.  That’s when I decided to make a change. I went to see an acupuncturist.  She made no promises.  Six needle pokes and 20 minutes later, my life was changed. I couldn’t believe it was that easy, but it happened.  I had no withdrawals, and I could put the urge out of my mind as quick as I thought about it.  I drove home and opened my middle console of the car, and I found that I overlooked a full pack of cigarettes… Nnnnooooooo!  That pack has never been opened, and I keep it as my little trophy from that day.  I put the date and a few inspirational notes.

This was one of the most difficult things I would ever face.  I set some goals like saving the money that would have put in my lungs.  We took two vacations on that money.  I knew walking by smokers would be difficult.  I would inhale, and remember each of those young ladies saying, “Daddy, we don’t want to see you like grandpa was in the hospital.”  Instant motivation, and the thoughts were gone.  I have never been able to get rid of the thought of taking a long drag off of a cigarette, or sitting on the patio with a beer and a cigar listening to 80’s rock.  I am in a good place now.

I have to thank my wife Vanessa, and our daughters Paige and Caitlin.  They always tell me how proud they are that I finally quit and they appreciate that I will be around longer.  Whirlpool has a difficult role when it comes to smoking. Whirlpool understands the health risks and has taken a hard stance.  Continuously moving smoking away from their facilities is a difficult stance with the work force.  I am sure there are a lot of people that mad as hell because the facility will be smoke free.  Trust me I feel bad for smokers, but you will feel much better in time if you can quit.  Trust me, I do feel better.

I am relieved that I am not controlled by smoking.  I am saving money, I can breathe easier, and I don’t feel I have as many colds through the winter.  I think people admire the effort it takes to quit, but I admire how brave my girls were to tell me what they were thinking.  I would have continued to joke about slowly killing myself had they not opened my eyes.  I can’t believe after 7 ½ years, it is still as easy as it was the first day.

I can only recommend not taking this habit.  Don’t even try it once, because it could grab you around your throat, and control you.  I want to do anything I can to help smokers. I have been there, and I know your struggle.  Use me to your advantage, I will not judge you.