One Step at a Time for Heath Culpepper 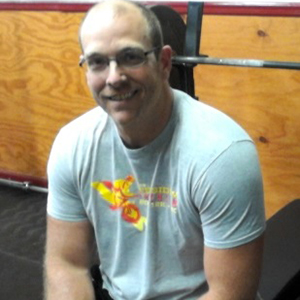 On January 1, 2009 I was out of shape; I couldn’t walk a flight of stairs without breathing heavy, sweating, etc. I was having anxiety issues. I was on the verge of starting blood pressure meds, and had no energy for any activity.

That day, after a holiday season of overeating and under-activity, I stepped on the scale. When the scale said 326 lbs, I was not very happy with myself and knew I had to make a change. The first step was deciding to do something to make myself better. I purchased the P90x workout program DVD set, a pull up bar, a set of 20-lb. dumbbells, a food scale, and created a food journal.

Back in my teens and early twenties, I was an athlete. When I started the P90x program, it was devastating to me that I couldn’t do a single pull up. But after about a month of the program and eating healthier, I had lost 30 lbs.––that’s 30 lbs. in 30 days! Then I did my first unassisted pull up. It was great.

Later that year, I bought a road bike and added another important activity to my new lifestyle.

Today, at 44 years old I am as fit as I was at 17. I began competing in sprint distance triathlons in 2012 and have completed approximately 20 events. My best year for competing was 2014, when I completed eight events and placed in six of the eight. At age 42, I played in three full contact alumni football games, something that would have been impossible in my 30s. I am healthy. I am very active, exercising eight to 10 times per week.

My decision to change was significant because it made me healthier, and it was a goal I set for myself. I know I’ve succeeded because I have maintained my level of fitness and my lower weight. My weight does fluctuate, but a healthy diet and exercise are now a part of my everyday life.

My wife and family have been my biggest supporters. They’ve offered constant encouragement and have been very understanding about the time I’ve spent exercising and preparing meals, and about the extra money I’ve spent on bicycle gear, workout gear, etc. Also, friends at Whirlpool talked me into riding bikes and eventually into competing in triathlons.

I tell people the hardest part of losing weight and getting healthier is starting. Keep it simple; it can be done. Just start small, set attainable and measurable goals, and knock them off one at a time. I started in my basement with about $100 invested––just me and a plan. The first day, I thought I needed a visit to the emergency room, but the next day was a little easier, the next day a little easier.

Weight loss and getting healthy is not a linear process; there will be ups and downs, but anything worth achieving is worth working for.