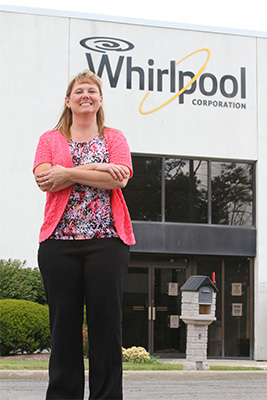 The Manufacturing Institute has announced it will honor Ottawa Plant Leader Jenni Hanna with the 2016 Women in Manufacturing STEP Ahead Award. The STEP — Science, Technology, Engineering and Production — Ahead awards honor women who have demonstrated excellence and leadership in their careers, and represent all levels of the manufacturing industry. Jenni is one of 130 women who will be honored at an awards dinner gala on April 21 at the Ronald Reagan Building in Washington, D.C.

“Congratulations to Jenni on this tremendous honor,” said Jim Keppler, vice president, Integrated Supply Chain and Quality. “She is a transformational leader who achieves differentiated results and consistently builds the engagement of her organization. Jenni is a true asset to our manufacturing team and is very deserving of this recognition.”

As part of The Manufacturing Institute’s broader STEP Ahead initiative, which was initiated in 2012, the STEP Awards examine and promote the role of women in the manufacturing industry through recognition, research and leadership for attracting, advancing and retaining strong female talent.

“Jenni exhibits the skill, drive and passion for excellence that defines a great leader,” said Jeff Durham, vice president, NAR Manufacturing. “She has been successful in every position she’s held, and is a role model for women in manufacturing at our company. Jenni also an advocate for manufacturing and clearly understands the relationship between manufacturing jobs, and how they build and keep communities strong.”

A recent survey from Deloitte and The Manufacturing Institute found that 80
percent of American manufacturing companies have a moderate to severe shortage
of available, qualified workers. Contributing to this gap is the underrepresentation of women in the industry. While women make up approximately 50 percent of the labor force, that number is only about 25 percent in the manufacturing labor force.

“These 130 women we are recognizing are the faces of exciting careers in manufacturing,” said Jennifer McNelly, president of The Manufacturing Institute. “We chose to honor these women because they each made significant achievements in manufacturing through positive impact on their company and the industry as a whole.”

McNelly said honorees are nominated by their peers, company officials, or professional    service firms. Nominators are asked to articulate how the nominee achieved significant outcomes in manufacturing through their positive impact on a company and the manufacturing industry, including increased revenues, reduced costs, improved productivity, increased customer satisfaction, development of talent and higher levels of engagement.

The Manufacturing Institute is the 501(c)(3) affiliate of the National Association of Manufacturers. As a non-partisan organization, the Institute is committed to delivering leading-edge information and services to the nation’s manufacturers.