Human Rights Day (March 21) in South Africa is both a celebration of the rights of all citizens and a solemn remembrance of the suffering and sacrifice necessary to secure them. It began as a commemoration of the Sharpeville massacre which occurred on 21 March 1960, at the police station in the South African township of Sharpeville in Transvaal (today part of Gauteng). 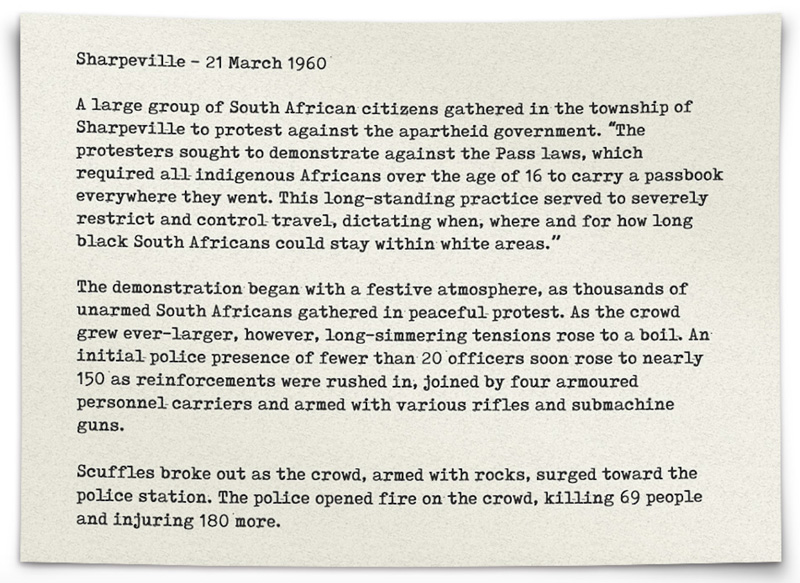 The Sharpeville massacre was a turning point in the long and difficult battle for human rights in South Africa. In 1986, the Pass laws were ultimately repealed as part of an effort to roll back some of apartheid’s most oppressive laws. The long struggle begun in Sharpeville was finally resolved on April 27, 1994, with the democratic election of President Nelson Mandela. Shortly after his election, Mandela declared March 21 Human Rights Day in remembrance of the event and in celebration of the newly-established freedoms for all South Africans. In present-day South Africa, March 21 is celebrated as a public holiday in honour of human rights and to commemorate the Sharpeville massacre.

In addition to honouring the victims at Sharpeville, Human Rights Day celebrations in the workplace celebrate the human rights enshrined in South Africa’s constitution. These hard-earned rights include the right to equality before the law (getting a qualification and working on your dream career), the right to inherent human dignity, the right to freedom of movement and residence, the right to language and culture (Diversity in the workplace), the right to peaceful protest (right to voice your opinions to the HR department) and the right to life.