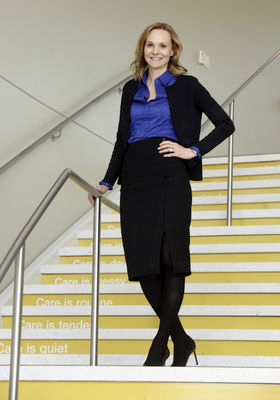 Liz Door has been an executive at two Fortune 500 companies.

However, it’s the second one that has made her a prominent presence in Southwest Michigan.

The St. Joseph resident is a senior vice president of global strategic sourcing at Whirlpool Corp., where her division is responsible for acquiring all parts and materials for the company. Door and her team are responsible for billions of dollars in annual purchases, including components purchases – such as motors, metal and harnesses – and purchases in other goods and services – including advertising agency support.

“Anything needed to run the business, we purchase it for the company,” Door said.

They work with internal business partners in engineering, marketing, information technology and beyond to manage external suppliers that meet their cost, quality and other business needs. Door was promoted to this global position in July 2017. Previously, she held a similar role that focused on the North American region.

Door, who has been with the Benton Harbor company a little over seven years, was drawn to the appliance sector from General Motors. Door held several titles during her 15-year tenure with GM.

She started as a package engineer before going into what she refers to as “the fishbowl” of global purchasing and supply chain.

“I had made it through the bankruptcy at General Motors, which was a very difficult time. Many employees had their resumes on the street,” Door said. “I saw the emersion out of bankruptcy and two new CEOs (with GM). We were on the up and up when this opportunity presented itself to me.”

When she was approached by an external third party for the Whirlpool job, Door took the first meeting and found herself interested. Several meetings and interviews later, Door agreed to come work in Benton Harbor.

“It was a really big life decision because GM is the type of company – similar to Whirlpool – that people lead an entire career there,” she said. “I went from one iconic corporation to another.”

Door said she was more of a subject matter expert in a subsystem of a vehicle at GM. Her scope of information at GM was more in depth in terms of technical knowledge, where she focused on chassis. At Whirlpool, Door said her job called for a broader approach.

Door is originally from Oxford, Mich., a small suburb outside of Detroit. She earned a bachelor’s degree from Michigan State University, and would later pick up her master’s in business administration – which she earned later in her career while working at GM.

She’s also spent time on the assembly line. Her first job out of college was as a quality engineer in a Chrysler plant in St. Louis, Mo. Door made her way back to Michigan by securing a contract engineering job. It was there that she got closer to the product itself.

At Whirlpool, she said there is no average day.

She can begin her day talking with team members in China or India about the state of their financials. Throughout the day she can look at new business Whirlpool is sourcing.

“I enjoy my work because it’s very measurable. That’s what attracted me to working in this space and it’s why I’ve stayed,” she said. “In the supply chain field, you see results. You impact the revenue through delivering great product, as well as the business’ value proposition through productivity.”