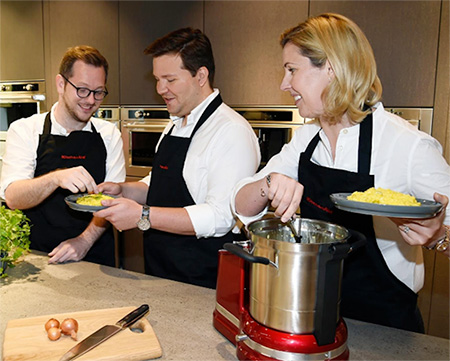 Born in Northern Ireland, Clare grew up on a farm in County Antrim and moved to England at 16 to learn the skills which would eventually make her a world-class chef.

In 2002 Clare joined Restaurant Gordon Ramsay and worked her way up the ranks to become Senior Sous Chef. Clare left London in 2005 to gain experience abroad and joined the kitchen at Alain Ducasse’s renowned Le Louis XV in Monte Carlo. In 2008, soon after returning to London and Restaurant Gordon Ramsay, she was promoted to Head Chef aged just 29 and in 2012 became Chef Patron.

Due to open her own restaurant in 2017, Clare has now taken the role of Consultant Chef for the Gordon Ramsay Group. Her devotion to her craft, uncompromising standards and meticulous work ethic are just three of the reasons why she remains the first and only female chef to run a restaurant with three stars in the UK.

In 2013, Clare was appointed Member of the Order of the British Empire (MBE) for services to the hospitality industry. The Good Food Guide awarded Chef of the Year to Clare in 2013 and she and her team achieved a perfect 10/10 score in 2014, 2015 and 2016 – one of just three restaurants to receive such acclaim in Britain. Clare was awarded the Chef Award at The Cateys 2016.

Clare says: “Working with appliances that harness innovative technology but are also a joy to use is important to me, both when cooking personally and professionally.

”The incredible range of professional performance appliances from KitchenAid allow me to make outstanding dishes. Not only are they intuitive to use, they look beautiful too. KitchenAid ensures that from concept to creation I can fully realize the potential of my culinary ideas.

“The London Experience Store is a space where the food community can get hands on experience cooking as well as find new stimulation – it’s a hub for new ideas.”

Coming from a family of bakers, Edd’s first memory is standing on a stool in the kitchen helping his mum to make mince pies. He’s come a long way since then. After studying politics at university Edd decided to channel his energy into baking. Back in 2010 when The Great British Bake Off made its debut on BBC2, Edd was crowned the show’s first ever best baker.

Since winning The Great British Bake Off Edd has made baking his full time job, writing three cookbooks – The Boy Who Bakes (2011), Say it with Cake (2012) and Patisserie Made Simple (Oct 2014). His blog, theboywhobakes.co.uk, has been named as one of the best UK blogs by Woman and Home Magazine and as one of the best baking blogs by channel4.com.

Edd says: “Food is my passion and the professional performance that I’ve achieved with KitchenAid over the years makes it an ever-present in my kitchen.

“Through being an ambassador of the Serious About Food Council I have found a community that shares ideas, experience and knowledge – helping to invigorate and inspire.”

Having trained as an Interior Designer and Interior Stylist at Central Saint Martins in London and followed up with training from KLC School of Design, Grant set up his blog, Interior Style Hunter, as a way to share his passion and knowledge of interior design with the aim of helping readers to be more confident in creating beautiful spaces.

A strong believer that everybody should have access to good design, Grant’s first foray into interior design was just over a decade ago when he lived in Cape Town. Since then he has worked with various brands including a styling project for auction house Christie’s and hosted talks at French trade show Maison et Objet.

Grant says: “Combining iconic design and culinary style is key to creating a kitchen that will be the heart of your home. Is there anything more iconic than the Classic Stand Mixer? KitchenAid is an absolute must have for anyone who wants to unite style and substance in the kitchen.”

Since the introduction of its legendary stand mixer in 1919 and its first dishwasher in 1949, KitchenAid has built on the legacy of these icons to create a complete product line – from utensils to appliances large and small that offer professional performance and are designed for the passionate gourmet. The KitchenAid brand celebrated its 90th anniversary in 2009 and forms part of the Whirlpool Corporation. For further information on KitchenAid, please visit www.kitchenaid.eu.