Dream Day for Marine Veteran and His Wife 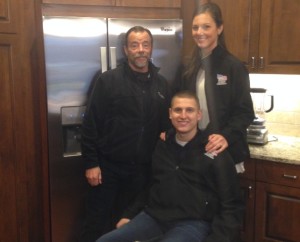 As U.S. Marine Corporal Zachary Nelson exited his truck in Noblesville, Ind., his face lit up with a big smile. A huge flock of geese flew over Corporal Nelson and his wife just before a group of visitors sang the Star Spangled Banner. These were lifetime memories of a special day when the couple received keys to their new specially adapted home.

The new home was the 200th completed by Homes for Our Troops (HFOT), a non-profit organization that builds special housing for injured veterans who have sacrificed in service to their country. Since 2013, Whirlpool Corporation and the Whirlpool Veterans Association (WVA) have supported America’s disabled Veterans with appliances for their new HFOT homes.

Corporal Nelson enlisted in the Marine Corps immediately after high school and became a motor transport specialist with the 6th Regimental Combat Team. In July 2012, some six months into his first mission to Afghanistan and just two days before his 21st birthday, Corporal Nelson’s vehicle hit a boulder and rolled into a ditch during a mission to Camp Delaram in Helmand Province. Stationed as gunner on top of the vehicle, Corporal Nelson was crushed and could not move his legs. After being airlifted by MEDEVAC helicopter to medical facilities in Kandahar, he learned he had sustained a serious spinal injury that would leave him paralyzed from the chest down.

When the military hero returned to the United States following surgery in Landstuhl, Germany, Corporal Nelson first went through grueling physical and occupational therapies at Walter Reed Medical Center in Maryland and James Haley V.A. Hospital in Florida. But he looked forward to the day when he could return to his Indiana home.

Life was not easy when Corporal Nelson first returned to Indianapolis. His home was too small for him to move around in a wheelchair, and he could only enter through the garage thanks to a special ramp built by his friends. Other challenges included wheeling around on carpet, taking a shower and reaching the kitchen cabinets. But long afterwards, Corporal Nelson and his wife were surprised to learn they had been selected to receive a new home from HFOT. 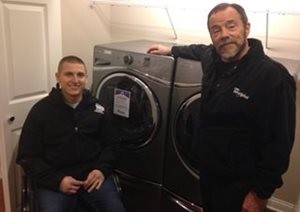 On January 9, more than 100 friends, family, neighbors and supporters arrived to welcome the Nelsons to their new home. Among them was Indiana Governor Mike Pence, the first governor to attend and speak at a key ceremony. Governor Pence himself has a son serving with the Marines at flight school in Pensacola, Fla. Other speakers included Jeff Tamme, a pro football player, who runs an annual HFOT charity golf tournament. Retired Army General Richard Cody, CEO of HFO,  also spoke passionately to the family and guests.

“Zach was somewhat overwhelmed, but spoke well with great appreciation for everything and everybody,” said Bob Lemyre, vice president of Purchasing Operations in Global Strategic Sourcing, a member of the WVA and a Marine veteran. “The crowd was very responsive and really appreciated Whirlpool Corporation’s commitment to America and HFOT.”

Probably the biggest highlight for Corporal Nelson was seeing his whole team from the life-changing day in Afghanistan welcome him to his new home. Sgt  James Gornyecz, who badly broke his arm in the accident, spoke about how he had given up and was going to let the arm be amputated. However, he found motivation from Nelson to fight through personal struggles and that helped him keep his arm.

“As always, this is one of the most simultaneously humbling and inspiring things I get to do,” Lemyre said after attending the ceremony.