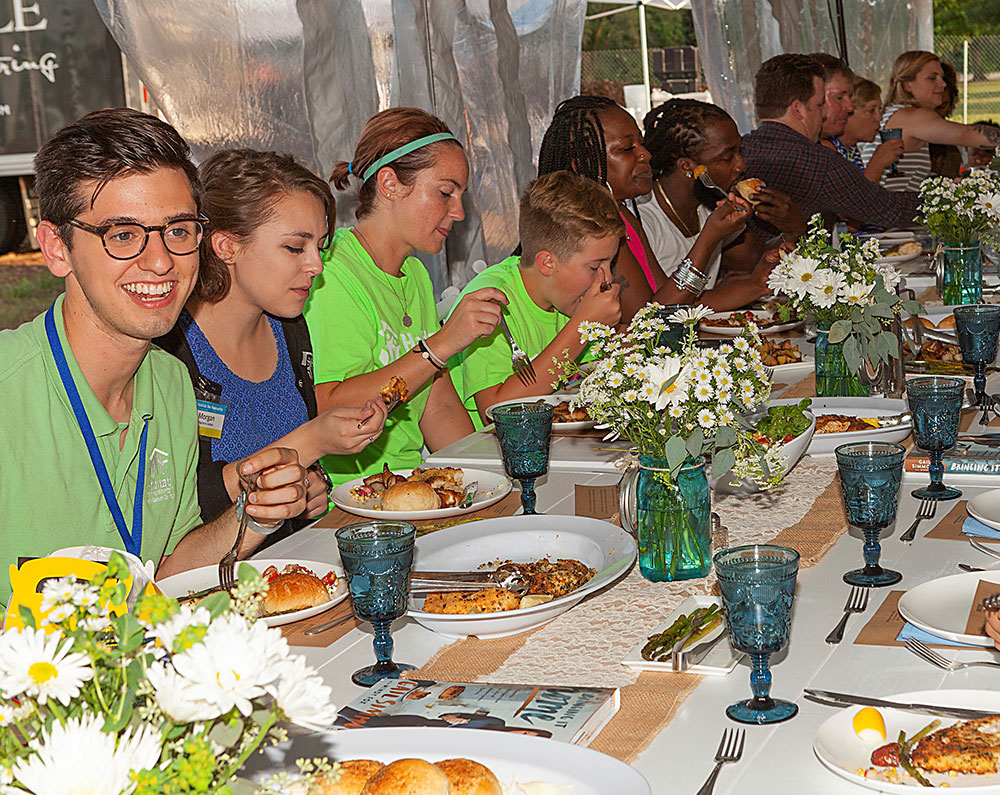 Jim Williams, CEO of Habitat for Humanity of St. Joseph County, spoke ahead of a dinner prepared by Whirlpool Corporation and celebrity Chef Gail Simmons.

The Jimmy & Rosalynn Carter Work Project runs Aug. 26 – 31. This year, volunteers and family members will build 22 new affordable homes in Mishawaka, Indiana alongside President and Mrs. Carter. With their employee volunteers, Whirlpool will also donate appliances, which will be installed into the new homes as part of an ongoing partnership with Habitat for Humanity.

“For nearly two decades, Whirlpool Corporation has worked with Habitat for Humanity to help build new homes alongside families,” said Jeff Noel, corporate vice president of communications & public affairs for Whirlpool Corporation. “We know the importance of transforming a house into a home, and kicking off the upcoming build with this dinner is about exactly that: going beyond involvement in the building process and taking a step toward helping these families create a true community.”

As an ongoing extension of the dinner, Whirlpool Corporation is also giving a three-month subscription to Raddish, a cooking club for kids, to each of the 41 families.

“It’s fantastic that these families have a chance to bond before we officially kick off a week of building during Carter Work Project,” said Julie Laird Davis, vice president of Corporate and Foundation Relations at Habitat for Humanity. “This is a new beginning for the whole neighborhood, and sharing a meal together is a powerful first memory for everyone to share.”

In less than two weeks, more than 1,790 volunteers from around the world, including 75 Whirlpool Corporation employees, will join the families to begin construction efforts.

About Whirlpool Corporation and Habitat for Humanity
In more than 18 years of partnership with Habitat for Humanity, Whirlpool has developed active programs in more than 45 countries with a commitment of more than $107 million. In the United States and Canada, the company has donated more than 191,000 ranges and refrigerators to new Habitat homes, serving more than 100,000 families. Additionally, Whirlpool has donated more than 42,000 products to Habitat ReStore retail outlets, helping raise nearly $5.7 million. The company has engaged thousands of employee volunteers, sponsored nearly 180 homes and donated products to more than 76,000 Habitat families Europe, Middle East and Africa. Whirlpool plans to support the work of Habitat around the world through product donations, financial contribution and/or volunteerism.

About Whirlpool Corporation
Whirlpool Corporation (NYSE: WHR) is the world’s leading major home appliance company, with approximately $21 billion in annual sales, 92,000 employees and 70 manufacturing and technology research centers in 2017. The company markets Whirlpool, KitchenAid, Maytag, Consul, Brastemp, Amana, Bauknecht, Jenn-Air, Indesit and other major brand names in nearly every country throughout the world. Additional information about the company can be found at WhirlpoolCorp.com, or find us on Twitter at @WhirlpoolCorp.