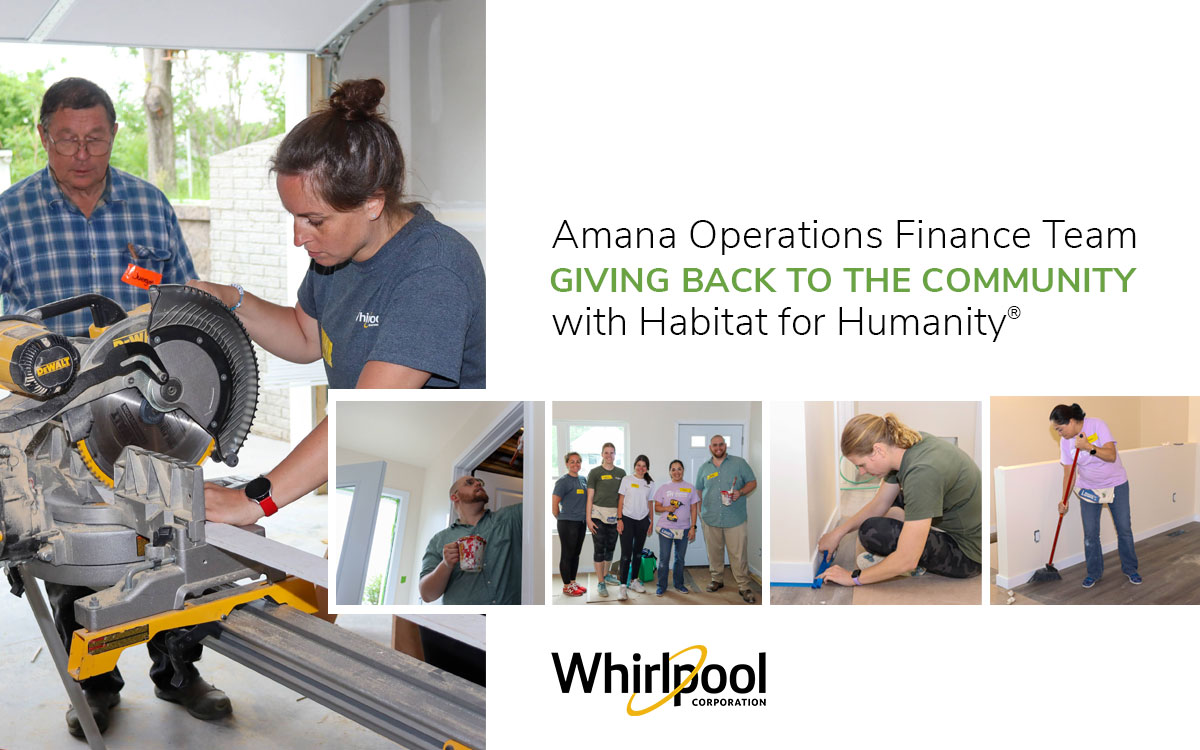 Every month, Whirlpool Corporation’s Amana Operations Finance Team chooses an engagement activity that will bring them together outside of the workplace. Recently, they chose to help Cedar Valley Iowa Habitat for Humanity with its newest home build. The team spent its day in the nearby city of Cedar Rapids alongside other Habitat for Humanity workers painting the house and installing doors.

Sara Rodriguez, a financial leader at Amana, was one of five team members who volunteered to work on this build. “We thought that this was the perfect engagement activity, where we could also give back something to the community,” she says.

At the time of this build, the house was not finished and a family had yet to be selected. The estimated completion date is set for early summer. Rodriquez says that Habitat not only helps people from the community but some of her peers as well. “There’s a group of Whirlpool families who have also benefited from the program,” Rodriguez says.

We got to give back to the community, and it also feels great knowing that it will help somebody to build a better life along the way.”

This build will not only change the lives of a future family with this home, but it also educated the finance team on how the home building process works.

Rodriguez says, “We were taught how to use the power tools, so that was great. The team was pretty amazed by the job that we had to do and what we were able to accomplish.”

Knowing they were helping a family obtain a new “forever home” was rewarding for the team.

“I think that’s an awesome feeling we all had after working on this build. We got to give back to the community, and it also feels great knowing that it will help somebody to build a better life along the way.”

Having the opportunity to work with Habitat for Humanity on similar projects is something many Whirlpool Corp. employees do as a way to give back to their communities in the nine U.S. plant cities where Whirlpool Corporation is located, as well as in the communities near its headquarters in southwest Michigan. Whirlpool Corp.’s relationship with Habitat has been ongoing for more than 20 years.

“If this is something that we could do again, I would say that my full team and even other teams within the Amana plant would be very, very, likely to participate in this type of volunteer opportunity.”

When asked to describe this experience in one word, Rodriguez says, “Fulfilling.”