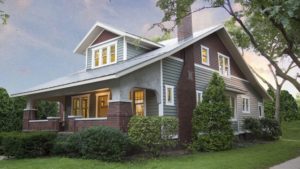 The first phase of the ambitious ReNEWW House project has slashed this home’s HERS score to near zero.

IN JULY 2013, Whirlpool Corporation partnered with Purdue University on a retrofit of a late 1920s bungalow in West Lafayette, Indiana. The goal: to create more livable spaces while lowering operational costs and environmental impacts.

Called the ReNEWW house, for Retrofitted Net-zero Energy, Water and Waste, the structure will be renovated in three phases, with each phase lasting roughly a year. Phase one, a deep-energy retrofit, was completed in the summer of 2014.

On Sept. 12, 2014, the house officially opened as a “living lab.” “Originally, we partnered with Whirlpool to establish a graduate co-op program where four engineering students would split their time between six-month rotations at Whirlpool and two semesters at Purdue,” says Eckhard Groll, the Reilly Professor of Mechanical Engineering and director of the Office of Professional Practice at Purdue University. “This was the foundation for the ReNEWW House, as it provided a living dynamic in which to get real world data.”

Up to three graduate students participating in the Whirlpool Engineering Rotational Leadership Development (WERLD) program will live there throughout the project. They and Purdue researchers will monitor more than 70 data points inside and outside the home to evaluate its performance.

Read the full story on greenbuildermedia.com >>>