A Day of Service 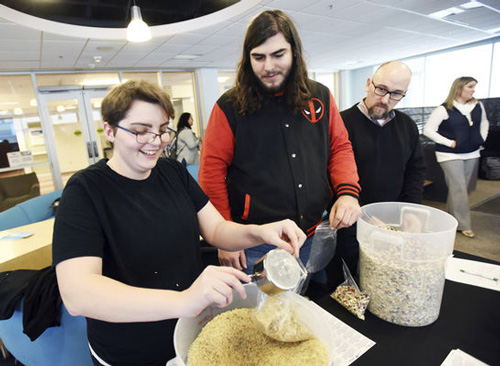 From left, Marcus Thompson and Shawn Johnson, with Lake Michigan College, join Cean Burgeson, with Whirlpool Corp., as they put together batches of bean soup to be distributed to area soup kitchens Tuesday at LMC as part of the MLK Jr. Day of Service.
Photo by Don Campbell / HP Staff

Splese was among several other Whirlpool Corp. employees volunteering during the company’s Day of Service that was created in remembrance of the civil rights activist.

Dozens of Whirlpool employees volunteered at seven local charities in the Twin Cities area Tuesday, on the day after MLK Day.

Tasks included playing bingo with local seniors at the Pine Ridge Rehabilitation and Nursing Center, tutoring kids at the Readiness Center and supporting projects at the LOGAN Autism Learning Center.

“We wanted to partner up with Lake Michigan College,” said Splese, who is a senior project engineer for licensing at Whirlpool. “We thought doing something for the soup kitchen was a good way to volunteer. Last year’s was a success so we decided to do it again.”