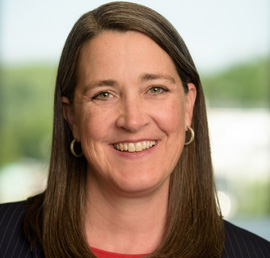 Patricia K. Poppe was appointed a director of Whirlpool Corporation in December 2019.

Patti Poppe is President and Chief Executive Officer of Jackson, Michigan based CMS Energy and its principal subsidiary, Consumers Energy, Michigan’s largest utility and the nation’s fourth largest combination utility. Consumers Energy provides electricity and natural gas to 6.7 million of Michigan’s 10 million Lower Peninsula residents. She was elected to this position in July 2016.

Poppe held a variety of automotive management positions and served as power plant director at Detroit, Michigan based DTE Energy before returning to her hometown of Jackson to join Consumers Energy in 2011.

As President and Chief Executive Officer, Poppe has focused on connecting the company more closely with its customers and adapting lean operating system principles throughout the utility. She also has led the company’s commitment to a triple bottom line in service of people, the planet and prosperity. At a time of unprecedented change in the energy industry, Poppe has helped to uniquely position CMS Energy and Consumers Energy into a clean and lean company able to act as a world class performer delivering hometown service.