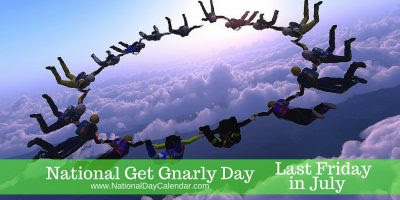 The last Friday in July provides an opportunity to embrace new ideas and toss out old ways on National Get Gnarly Day.

The word “Gnarly” gets a bad rap.  It can mean “bad” or “dangerous” but can also be exciting, which is why surfers often use the term to describe the waves they tackle.  Much like surfers challenging the waves, National Get Gnarly Day challenges us to put some gnarliness into everything we do.

Five Sure Ways to Add Gnarliness to Your Life

In 2016, Whirlpool launched a campaign to put some “gNARliness” into everything they did as a way to encourage their employees to get excited about reaching goals and satisfying customers. The “NAR” in “gNARliness” had special meaning, representing their North American Region. When the campaign kicked off, the employees’ response was overwhelming.  As a result, Whirlpool wanted to share this gnarliness by creating National Get Gnarly Day.  The Registrar at National Day Calendar approved the day in June of 2016.

There are over 1,200 national days. Don’t miss a single one. Celebrate Every Day with National Day Calendar!