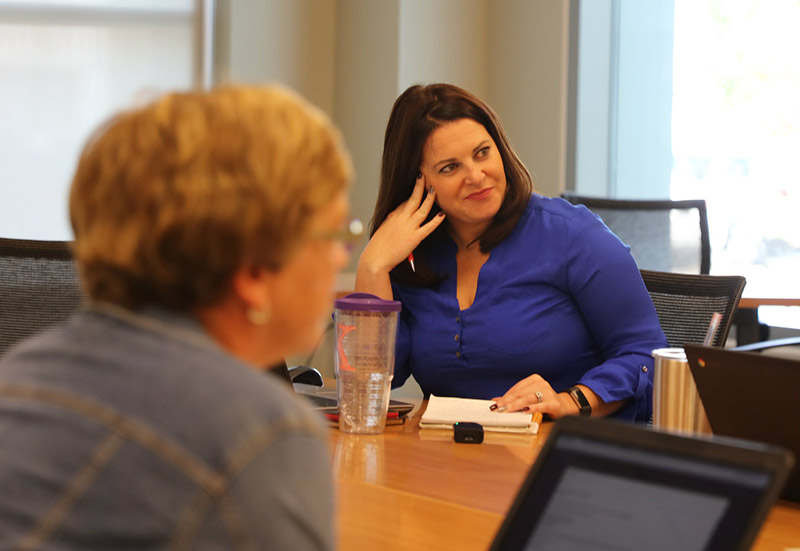 The Corporate Newsroom’s Content Creation Manager Kelly Tucker originally saw her future as more of a scientist than a journalist, focusing much of her time on atmospheric chemistry and physics rather than words. “In my previous life I was a meteorologist in Grand Rapids,” she said. “Weather has always been my passion. I loved it since I was a little kid when I would sit on the porch and report on the weather coming in.” This love led her to pursue a master’s degree in meteorology, which eventually landed her a position as the first on-air female meteorologist ever hired at Fox 17 in Grand Rapids, fulfilling her lifelong dream, but at the same time sending her career aspirations in a slightly different direction.

“I found out quickly that TV is very short-staffed, so I got moved to anchor and I did a lot of reporting because that just came with the job,” said Tucker. “While I enjoyed anchoring, I missed weather a lot. I started seeing the writing on the wall that they were slating me to take over the main anchor role, and at that point I was about to get married and I was looking to the future. In television, if you want to go anywhere, you have to go to a different market.”

Moving wasn’t an alternative that Tucker wanted to pursue, so she began to seek opportunities outside of local TV news. “I had worked with a lot of public relations people and I realized that they don’t always understand how media works. I thought that I would have a really good future in public relations because I knew the media from working in it.” 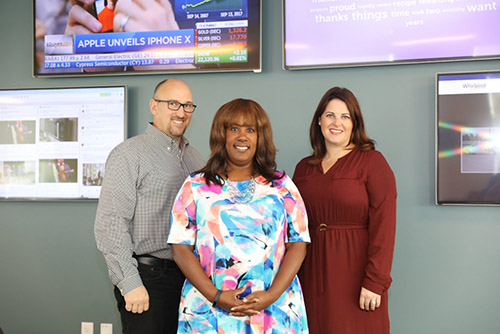 Tucker began networking with her friends who had already left TV to pursue other endeavors and learned about Monica Clark, senior manager of external media and content strategy, and head of the Whirlpool Corporate Newsroom. “I heard that she had made the successful transition out of TV into PR, so I blindly reached out to her and asked how she did it.” Through that connection, Clark let her know that the corporation might be looking for another journalist in the near future. That position opened up a few months later, forcing Tucker to weigh her options. “I was really debating whether I was ready to take the leap to get out,” said Tucker. “Then I thought, ‘what do I have to lose?’ I ended up applying, got the interview and ended up getting the job and loving it.”

“We were having some success with the newsroom,” said Director of Corporate Reputation and Community Relations Deb O’Connor. “In the first year we did quite well, generating a lot of impressions for our stories, but It was obvious that we needed to add people to the team. We needed someone to focus more on social media and still be in the newsroom full time, cranking out stories. That’s why we hired Kelly. The Institute of Home Science sites for kitchen and laundry were also brought over from brand and combined into a single corporate site. Somebody needed to constantly feed that with content, so Kelly was assigned that as well. She also reviews all external speaking engagements to make sure that they are strategically aligned and on message.”

Despite leaving behind her dream of working as a meteorologist, she has no regrets. “I got to follow my dream and it was wonderful, Tucker said.” Her work as a journalist, however, continues in her role today. “I think that being a former journalist—and I feel like I’m always a journalist—made me curious and tenacious,” she said. “Never letting the word ‘no’ or getting a door slammed in my face stop me from achieving what needs to get done. I think those are some of the best qualities in anybody in any company; that you’re willing to always give a million percent to your job, that you’re always going to fight the battles you need to in order to get results. I think those qualities are really good for PR, because in order to get the attention of a journalist you have to think like one. You have to know what catches their eye. Being able to write content that journalists find easy to pick up on is priceless.”

Tucker also draws on her experience managing the TV station’s social media and managing her own personal branding on social media in her current role as well. “So much of social media is watching what works and what doesn’t work; seeing what the conversation is and how people are putting in their two cents.”

Moving from the TV newsroom to the corporate newsroom hasn’t changed the level of enthusiasm she has for her work or her career. If anything, that enthusiasm has only been amplified. “I feel like we are leading the charge of something that is groundbreaking,” said Tucker. “I think we’ve gotten into something that is genius. We’re more proactive rather than reactive, so instead of asking someone to tell our story for us, we can take ownership of it.”

If you have an idea for a story, email Kelly Tucker: kelly_m_tucker@whirlpool.com